Star Wars: The Old Republic ‘Gay Planet’ Controversy Gets Its Own Choose-Your-Own-Adventure Game 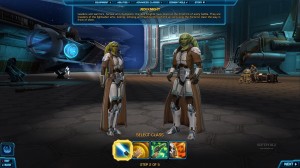 Last week, Star Wars: The Old Republic (SWTOR) announced players could romance NPCs of the same gender in their soon-to-be-released expansion, “Rise of the Hutt Cartel.” But this step into the 21st century was catapulted back to a long time ago with the news that same-gender romances would be confined to one planet.

Or as Kotaku entertainingly pointed out, “…the same sex romance will take place on a specific planet for now—Makeb—and you have to pay money to go there. Some have jokingly dubbed it ‘pay-to-gay.’”

The Internet—and hey, maybe even a few players of SWTOR—didn’t like the idea of a lone gay planet. But only one of them, Anna Anthropy, created a choose-your-own-adventure game about it.

It’s called Hunt for the Gay Planet, and it’s fun to play (also, NSFW). A simple enough CYOA, most of the choices you make lead toward a single decision tree. But how can you resist playing a game with lines like, “You return to the intersection and keep going straight.” “Heh heh. Honey, I can’t even THINK str—”

Check it out, here.