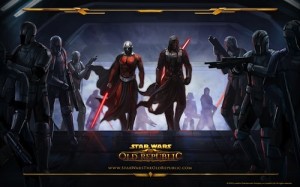 Gay gaymers have more choices than ever when it comes to playing videogames their way, what with options to have homosexual relationships in many Bethesda (Skyrim) and BioWare (Mass Effect II and III) games. Now another door is opening in the digital closet. In a few months, players in the EA MMO, Star Wars: The Old Republic (SW:TOR), will be able to romance same-sex characters.

According to Jeff Hickman, executive producer of SW:TOR, the option to play gay (or straight—it’s a free galaxy) will become available with the release of the new expansion, “Rise of the Hutt Cartel,” in Spring 2013.

“We are adding SGR with some NPCs on Makeb [a planet invaded by the Hutt Cartel] and do intend on pursuing more SGR options in the future.”

Although this is good news for players who are gay, bisexual, or like to keep their options open, it’s not quite great news. These romances still cannot take place with a companion character, who assists you in your travels.

“I realize that we promised SGR [same gender romance] to you guys and that many of you believed that this would be with a companion character. Unfortunately, this will take a lot more work than we realized at the time and it (like some other pieces of content we talked about earlier in the year) has been delayed as we focused on the changes required to take the game free-to-play. As we have said in the past, allowing same-gender romance is something we are very supportive of.”

(I queried EA about Hickman’s timeline for the ability to romance a companion character and am awaiting a response.)

It makes sense to include the option of a same-gender romance—to be accepted or ignored, depending on your preferences—when you consider that 8.2% of Americans have reported “same-sex sexual behavior.” Many players like to identify with their characters, and this gives a chance for those gaymers to have a relationship with the person of their choice.

Toni Rocca, Community Director for GaymerConnect, the organization running the upcoming Gaymer X, the first convention for LBGTQ gamers, “This has been a long time coming. We’re excited to see the game companies recognizing the diversity of their fans and we expect to see this trend continue.”

This isn’t the Star Wars universe’s first foray into homosexuality. The Knights of the Old Republic, the BioWare game that established the Old Republic, had a lesbian character, Juhani, who could be romanced by Female Revan.

And after the Hutt expansion, it won’t be the last.