State Of The Game: NVIDIA Talks SHIELD, GRID, Android, And The Future Of Gaming (It’s Not Consoles) [UPDATED] 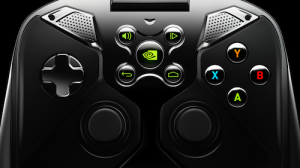 NVIDIA has been a busy technology bee recently. Its Tegra SoC (System on a Chip) is at the heart of an increasing number of Android-based gaming products, including the Kickstarted OUYA and (likely) Mad Catz’ MOJO, announced last week at E3—not to mention numerous smartphones and tablets. But NVIDIA, which issued the first Tegra chip back in 2008, is no longer content to produce components for other vendor’s products. At the end of June, the Santa Clara-based company will be releasing its SHIELD game controller/console, which it showcased to the public at E3.

SHIELD is an all-in-one device that will allow gamers to play Android games natively on its gamepad, which also sports a built-in screen. According to NVIDIA, several developers are working on games to take advantage of SHIELD’s control scheme and abilities, with more than two dozen titles designed for the console or enhanced to work at launch.

But the knock-your-socks-off feature of the SHIELD is the streaming feature, which, if all goes according to plan, will allow gamers to pause in mid-game and continue the action on their televisions. And when your significant other kicks you off the big screen, you can go back to your game on the smaller screen—instantly.

This means NVIDIA has plenty to talk about. I caught up with senior software engineer Clay Causin, and separately, director of product marketing Jason Paul to hear more of their plans and expectations for SHIELD and Android gaming.

What can gamers expect from a SHIELD device?

Jason Paul: There’s over thirty games we’ll have at launch [for] SHIELD. That means they have full controller support as well as graphic enhancements. In addition, we have our PC streaming feature, which provides an awesome way to experience PC games around your house. In addition to its core gaming value, it is a great way to listen to music and a great way to see movies. You can plug it into your TV and watch movies on your big screen.

It also offers a built-in tablet with all of your favorite apps: Facebook, Twitter etc. It’s a powerful gaming device that provides a lot of entertainment capability as well.

NVIDIA doesn’t typically make end-user peripherals. So why are you making SHIELD?

Clay Causin: Well, PC gaming can use it. As a gamer, I want to sit on the couch with my significant other instead of being separate locked in a room. I can sit down and game side by side while she watches TV.

JP: Look at the game business model. Most consoles…subsidize the hardware and then sell the games for a lot of money. Our model is you may pay a little more for the hardware, but you can get full console-quality games for $4.99. So you look at the full capabilities of the platform, and you look at total cost of ownership, and I think it makes a lot of sense.

UPDATED: NVIDIA recently lowered the price of the SHIELD to $299.

CC: Being a PC gamer, I didn’t know about gaming with a controller in my hand. I didn’t like the idea at first, but I’m finding myself using my SHIELD unit more at home than I ever thought I would.

JP: The feedback has been great. Everyone has been able to get their hands on the device just loves it. And the developers that get the device are really delighted to have a platform that enables their vision for their game…in terms of graphics capabilities, the audio, the visuals, and the controls.