State Of The Game: Razer Talks Growth, Innovation And A Banner Year for Mobile PC Gaming 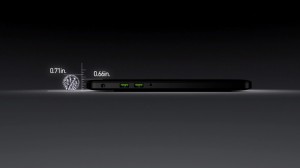 Until 2011, Razer (which, just like the Walt Disney Company, started with a mouse) was better known for its gaming peripherals than for the systems on which these peripherals are used. But since then, the San Diego-based company has branched out into Blade, a laptop for gamers…just in time to see the sales of PCs decline.

But Razer is confident that their product stands out in a declining market. Heathcliff Hatcher, director of product marketing at Razer, told me at E3, “When you look at PC gaming sales or PC sales data, the gaming sector is the one area of growth you are seeing in the laptop systems space. So we’re really excited about being a driver and innovator in that space.”

The PC Gaming Alliance concurred in March. “The traditional desktop is no longer the gaming platform of choice as we are seeing more and more laptops with powerful GPUs and high end audio systems. PC gaming is going mobile.”

From Razer’s viewpoint, however, the PC gaming market is more than healthy. “If all of the different product manufacturers and new gaming companies that I saw pop up at [technology expo] Computex are any indication of how the industry is going, I think it is going to be a banner year for everyone…. There seems like there are a million new companies that are making gaming PC peripherals.”

In fact, Razer has noted that other PC makers are following in their silicon footsteps: “At Computex, it was really refreshing to see some other form factors that are coming out in the thin and light space, because it validates the ideas and concepts that we are trying to create.”

Hatcher is referring to both the Edge, its PC gaming tablet, and the third iteration of Blade, which comes complete with Intel‘s fourth-generation Core CPU (also known as Haswell) wrapped in a 14-inch screen package. The original Blade, with a 17-inch screen, is now known as the Blade Pro. “We’re expecting a massive amount of growth due to the popularity of our 14-inch Blade,” Hatcher said.

Only the Blade Pro features the unique “Switchblade,” a track pad with integrated display and ten programmable keys, but the 14-inch version is more portable, 4.1 pounds, as opposed to the Pro’s 6.5 pounds. It’s also more affordable: $1799.99 instead of $2299.99 (base price).

The first-generation Blade wasn’t compelling to me. It was too expensive for its abilties. With the Haswell iteration (and a Kepler-based NVIDIA GPU), Razer may have the right balance now.

Even so, these are sticker-shock-inducing prices for a game system, when you consider that, for the same money as the cheapest 14-inch model, you can buy a PS4, an Xbox One, and a Wii U…with change to spare. But these Blades offer both gaming oomph and portability. Plus, they have a second job as a standard PC.

“I use the Blade Pro for work and play. If I want to work on something at work, whether it’s e-mail or Excel, I can do that, and it has more than enough power for that. And when I want to play some Crysis on the go, I’m not taking two laptops. I’m taking a super thin notebook on the road, and I can do everything,” said Hatcher.

Razer is targeting the Blade Pro not just at professionals, but game professionals, an interesting twist that might justify the price, to some. The Pro comes with user-interface tools that make use of the Switchblade touchpad to work with Adobe Photoshop, Maya, GIMP, and others.

Hatcher said, “The neat thing about the PC gaming space is everything starts on a PC. Game developers build on a PC and then go…to these different platforms. We’re hoping we can see more of that in the future.”

Game creation is an interesting angle, but there’s a more important underlying point here too. Razer are making gaming PCs not just because they want to, and because they have the ability to, but because they can. Nobody can make a PlayStation, a Wii, or an Xbox because those console platforms are closed, and only Sony, Microsoft, and Nintendo can make one. Then they control who gets to publish to their platforms. (Controversially, OddWorld won’t be appearing on Xbox One because Microsoft won’t allow an indie developer to submit a title except through a non-self publisher.)

The PC, on the other hand, is an open platform. Anyone can make one, so for companies like Razer who want in on the action, the PC’s the only game in town. Good news is, the nightlife appears to be thriving:

“There’s so much content that you can get, from Angry Birds to Crysis 3. There are so many different form factors and choice on that platform that makes it really compelling. That’s one of the reasons we’ve always been a fan of PC gaming,” Hatcher said.

As Hatcher said (and I quoted him earlier, here), “The people who work here truly love gaming. We love to play League of Legends. We call it League of Lunchbreak.”