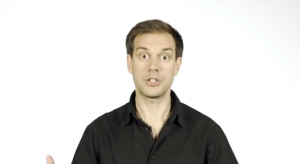 In 2010, writer Dan Savage and his partner Terry Miller created a YouTube video that promised LGBTQ youth that life will improve when they leave high school, a video that inspired the It Gets Better Project. The LGBTQ community is not the only group that requires a supportive video: Fans of George R.R. Martin’s saga, A Song of Ice and Fire, who have had to suffer through multiple deaths and dismemberment over the course of many books, as well as the television series, Game of Thrones, need to know their pain means something.

The comedy group, Second City Network, sympathizes. Or not. In their extremely funny video, readers explain their plight. “You may be asking yourself if you still want to read these books if every character you love is going to keep dying.” Then they assure readers that “It gets better.”

Of course, the more they emphasize how much “better” the books continue to become, the less convincing they sound.

By the time the comedians get around to discussing the most recent book, A Dance with Dragons, you’re absolutely convinced that there’s nothing “better” about it.

I highly recommend you check it out…but only if you’ve read A Storm of Swords or are not averse to serious spoilers.

Note: If you can tolerate extremely minor spoilers, you can start near the end, at 1:27, to get the full effect of the video.