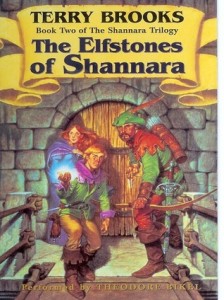 According to Variety, “Sonar Entertainment has acquired the rights to author Terry Brooks’ bestselling fantasy series “Shannara” and is partnering with Farah Films to produce a television series based on the books.”

Shannara, a series that started in 1977 with The Sword of Shannara, is about a post-apocalyptic Earth where much of humanity has mutated into dwarves, gnomes, and trolls. The television series would start with the second book, The Elfstones of Shannara, about heroes trying to stop demons from re-entering their world as the magical Ellcrys tree that binds the demons is weakening.

(It’s a good decision to start with the second book in the series. Many have criticized the first book as being too derivative of J.R.R.Tolkien’s Lord of the Rings. However, the second book has more engaging characters, as well as more female characters, particularly the brave Amberle.)

According to Wikipedia, Brooks is one of the biggest-selling fantasy writer alive, with over 21 million copies of his books in print, including 24 Shannara books (and counting). Of course, producer Dan Farah likely took this into consideration when choosing the Shannara series as a future television show:

“Terry has created a rich world of characters and stories that have entertained millions of readers all around the world for a quarter of a century,” Farah said. “He has a built-in fanbase that is bigger than those for even the most recent hit book series, like ‘The Hunger Games.’

Although Shannara’s many fans would love to see a television series, as of now, the books have only been optioned–which means that if a series is made, it may take a year to hit the small screen, perhaps longer. Until there’s a showrunner, a director, and importantly, a network buyer, we’ll have to contend ourselves with Brooks’ most recent book, Wards of Faerie, which was released August 21, 2012.