The American’s Guide to Doctor Who: The Power of Three 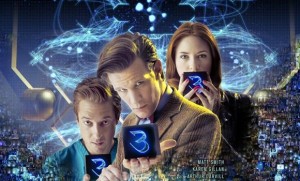 Here’s a look at the episode, “The Power of Three.”

After the black cubes appeared all over the world, a man named Professor Brian Cox was interviewed and said, “Are they extraterrestrial in origin? You’ll have to ask a better man than me.”

Cox is a particle physicist and the BBC’s go-to guy for science, much like Carl Sagan was in the 1970s and Michio Kaku and Neil Degrasse Tyson are today.

For a look at how awesome he is, check out his TED talk, here.

When Brian said, “I’m cream crackered,” what he meant was, “I’m exhausted.” You can tell what he means from context—he fell asleep immediately after—but wait, what?

Welcome to Cockney rhyming slang. According to CockneyRhymingSlang.co.uk,

Rhyming Slang phrases are derived from taking an expression which rhymes with a word and then using that expression instead of the word. For example the word “look” rhymes with “butcher’s hook”. In many cases the rhyming word is omitted – so you won’t find too many Londoners having a “bucher’s hook” at this site, but you might find a few having a “butcher’s”.

(Another example is the substitution of the word “wife,” which rhymes with “trouble and strife.” Because of this, Cockney men have referred to their wives as “trouble.”)

So “cream crackered” is a rhyme of “knackered,” which means extremely tired. However, had Brian been fully utilizing Cockney rhyming slang, he would have merely said, “I’m creamed.”