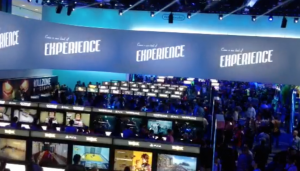 The Electronic Entertainment Expo of 2013 brought a convention-full of excitement, and it wasn’t just the reveal of the PlayStation 4 plus more details about the Xbox One. 48,200 attendees (up from 45,700 in 2012), myself included, had a look at the future of fun as E3 showcased the videogames that we’ll be playing in the coming months.

Here’s the best of what I saw.

I almost feel guilty about not choosing Watch Dogs. After all, it has unique storyline, while Batman: Arkham Origins is part of a long-running property. But while Watch Dogs was a fun, intelligent game, Origins has one thing that it doesn’t: Batman himself.

Warner Bros. Games Montreal took what was terrific about Batman: Arkham Asylum and Batman: Arkham City and made it better: Upgrades to Batman’s bat-gear. A fast-travel system. Dynamic events that pop out and complicate Batman’s best-laid plans.

Better still is the younger, rougher-around-the-edges version of Batman. After a half hour of gameplay, it was clear that he’s still working out the kinks in his crime-fighting style. It looks as if Origins will be giving us a bit of the man behind the Bat. (Hey, LEGO Batman 2 did.)

Origins feels like a sure-fire winner. I’m clamoring for more.

Honorable mention: I first saw Puppeteer at GDC and was suitably impressed. A second look was equally impressive. If Terry Gilliam leaves filmmaking for videogames, he would make something like this.

That Dragon, Cancer is more of an emotional experience than a videogame, but what a beautiful, sad experience. Here, a father soothes, and fails to soothe, his young son, Joel, who in an intensive care unit. We hear the father’s thoughts as he begs for his son to live and share in his simple victory of getting Joel to sleep.

The fact that this life is being lived right now by developer Ryan Green and his wife as their son undergoes treatment after treatment for Atypical Teratoid Rhabdoid Tumors makes this game even more painful and poignant.

Augmented reality as a game mechanic. I saw the real-time flow of data flash on screen in Watch Dogs (Disrupt engine with Havok physics), Tom Clancy’s The Division (Snowdrop engine), and Batman: Arkham Origins (Unreal engine with PhysX). The augmented reality overlay not only adds gorgeous 21st century graphics to the screen, but also provides extra information while maintaining the flow of gameplay.

As an example, see this gameplay footage of Tom Clancy’s The Division.