The Clone Wars: A Look At The Science Of ‘Orphan Black’ 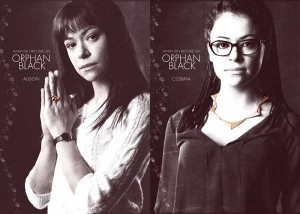 If you’ve seen Orphan Black, the BBC America TV show whose season 1 finale airs June 1, you’d know that our antihero, Sarah, is a clone. Now someone is going clone hunting, and it’s up to Sarah and her new-found clone sisters to learn who is behind their deaths—and their lives—before it’s too late. In a phone interview with the creators of Orphan Black, co-creator John Fawcett said, “We saw an amazing chance in concept of cloning to create a character-driven series.”

It works, particularly if your main characters all look exactly alike—although clones would in reality look different because of that nature vs. nurture thing: One could be eating a vegan diet, while another gorges on chips and soda. According to co-creator Graeme Manson, “Science is a way to explain this opening scene that we had in our heads: You find your doppelganger on a train platform in the moment before they commit suicide and assume that person’s life.”

Manson, much like writer Gary Whitta who co-wrote After Earth, believes that his business is storytelling, not teaching. He leaves that to their “fantastic science consultant, Cosima Herter, who around here we call ‘the real Cosima.’ Throughout the process we’ve brought her into the writers’ room and let anybody who was interested in production get in on her lectures of Cloning 101.  So we gave everybody the chance to get a grounding in the science as well.”

But just how realistic is it?

Tommy Lampley, a clinical research associate who works for a drug development company—one that brings therapies based on cloning procedures to market—said despite the fact that “Many major therapeutic advances have been made in cloning in recent years,” we’re not quite ready for prime cloning time.

In an email interview, Lampley said although “twenty different species of animals have been cloned to date…at this stage in the history, it is not possible to clone a human being.”

Cloning a human being is a tried-and-true science fiction trope, but the real-world applications are far more fantastic: Lampley said, “Scientist have successfully grown skin and muscle cells (the component of organs) and even been able to manipulate them into forming functional organs. To date, some of the less anatomically complex organs, such as a trachea and veins, have been ‘grown’ and successfully implanted. However, more development must take place before organs such as the heart or lungs are cloned.”

Lampley said, “It is noteworthy that significant progress is being made everyday with research being done across the world. As recently as May of this year, Shoukhrat Mitalipov, a developmental biologist at Oregon Health and Science University in Portland, and his team were able transform stem cells into beating cardiac tissue. This marks a cogent step in the continued development of cloning and the ability to clone a human being.”

But not everyone wants to see cloned versions of themselves or their loved ones on the streets. (Just ask protagonist Beth). Cloning is rife with ethical ramifications. Religious arguments aside, there is an ethical concern that cloning a human being—currently an unperfected technique—would result in people with excessively shortened lifespans, as well as the physical defects that have plagued many animal clones.

Currently, the most controversial problem with cloning is the use of embryos to acquire stem cells results, which results in the destruction of the embryo. However, some scientists believe that cloning will result in a healthcare revolution, where diseases such as Parkinsons and Alzheimers can be treated with “genetically compatible replacement cells.”

Star Tatiana Maslany recently earned a Broadcast Television Journalists’ Association Critics Choice nomination for Best Actress in a Drama for her work as Sarah (and Alison, Cosima, Beth, and Helena).

Unsurprisingly, Orphan Black was renewed for a second season.