‘The Day of the Triffids’ to Get a Remake? 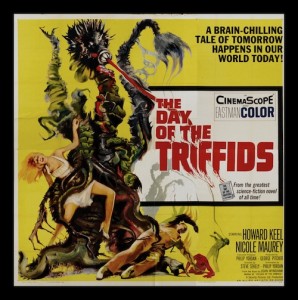 For better or worse, Hollywood’s trend of remaking classic science fiction is continuing apace. We’ve had Planet of the Apes (2001 and 2011), The War of the Worlds (2005), King Kong (2005), I Am Legend (2007), The Invasion (2007), The Day the Earth Stood Still (2008), and the upcoming John Carter (2012). Now writer Neil Cross (BBC’s Luthor) has been commissioned to write a screenplay–one of many steps in the lengthy process of making a movie–for another classic: Day of the Triffids.

If you haven’t read John Wyndam’s 1951 novel or seen its 1962 movie, you should run, not walk, to (what’s left of) your local book- and video stores. The Walking Dead stole The Triffids intro outright; it starts with the protagonist in a hospital, a lone survivor in a catastrophically changed world.

But instead of The Walking Dead’s zombies, our protagonist, Bill Masen, has to survive not one but two disasters. First, civilization is collapsing around him as most humans have been turned blind after watching an alien meteor shower. Second, Bill has to fend off the Triffids, plant-like creatures (bioengineered in the book; meteor-born in the movie) that devour all the tasty humans in their path.

The Day of the Triffids doesn’t just follow the trend of remaking classic science fiction: it’s also riding that post-apocalyptic wave we’ve been seeing so much of on television (The Walking Dead), movies (The Road) and fiction (Wastelands). And as with other post-apocalyptic fiction, it’s about survival, about people coming to grips with the death of their old civilization and creating the rules for a new one.

A good Hollywood version of this classic could be enjoyable.

The Day of the Triffids was recently remade as a two-part series by the BBC in 2009.