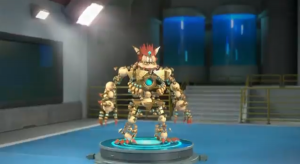 The PlayStation 4 will be released during the 2013 holiday season, which could mean Sony could release their newest console anywhere between mid November to December 31. But what’s a console without games to play them on? Sony not only revealed some important facts (while leaving out a few) about the PS4, but also gave us a taste of games to come.

Some of them taste so sweet, it makes me want to petition the higher-ups at Sony to consider celebrating National Left-Handers Day (August 13) as part of the holiday season.

Here’s a look at the games we can eventually expect for the PS4: Do you think that Clank needed to kick Ratchet to the curb and star in his own videogame? If so, then Knack looks like the game for you. Knack is an adorable robotic creature that grows as the game progresses—a useful skill, considering he has to help defend the world against alien invaders.

This family-friendly game looks both charming enough for younger players and complex enough to give the oldsters a challenge. Now if Japan Studios brings a character as fun as Captain Qwark, with lines like, “Oh no, we’re gonna die! Good thing I’m wearing clean underwear!” they could have a real hit. Gorilla Games’ co-founder Hermen Hulst said that the war that players in KSF participate in is similar to Cold War, Berlin. I didn’t see that. I did see a world similar to our own, albeit more technologically advanced. Soon, this militarily prepared area is under attack from above…

…as well as on the ground, in the form of a skull-creature who dresses like Altair in Assassin’s Creed. We deaded him as soon as we could, took cover, deaded a few others, then hitched a ride on a helicopter. The hard way.

KSF was fast, action-y, fun, and extremely graphics intense. Watching this trailer was the moment I recognized that PS4 games really were the next generation of gaming. If you love driving games, then the PS4 will be on your must-buy list, if only to play Driveclub. Games director Matt Southern really sold the game by describing the shine on the car’s exterior, the rainbow pattern reflected off the headlights, the fiber direction of the carpet.

Note: Evolution Studios trademarked the name “Driveclub” nine years ago. It took that long for technology to evolve to the point where Evolution could make the game they really wanted.

When Nate Fox of Sucker Punch took to the stage last night, he explained we’re being surveyed by millions of cameras, when we’re not spending cumulative years at airports, waiting to be scanned even more.

I liked the footage we saw a great deal, because much of our view came through the eyes of people observing the action through cameras, giving us the feeling that we’re always being watched.