The ‘Honest’ Trailer for Prometheus Is Brutal and Brutally Funny (NSFW) 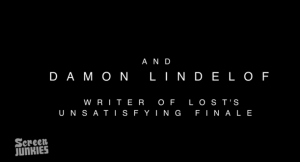 I wanted to love Prometheus with all of my geeky heart, but after seeing it, I was more disappointed than a child who woke up on Christmas morning and found a lump of coal in my stocking and my father dead in the chimney. It turns out I’m not the only one who felt that way about the Ridley Scott film.

YouTubers ScreenJunkies created their own version of the trailer for Prometheus, and it pretty much put a finger on many of my complaints about the film. Inept scientists. A character who runs from enemies in a straight line. An action heroine who really shouldn’t be rappelling.

The comments in this trailer are as harsh as they are hilarious. It’s only three and a half minutes, but it’s worth every second of your time.

And I “honestly” can’t say that about Prometheus.