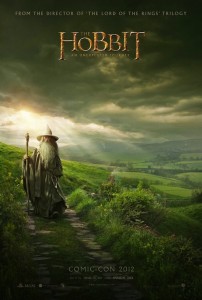 According to the general manager of Western long haul markets for Tourism New Zealand, Gregg Anderson, “We’ve seen a 50% increase in arrivals to New Zealand since Lord of the Rings.” The first film in the trilogy, Lord of the Rings: The Fellowship of the Ring, was released in 2001.

Lord of the Rings may have contributed to the economy of New Zealand…but then again, as Anderson said, “I’m sure Lord of the Rings played a huge part in that, but it wasn’t the only factor.

Anderson said that traveling to New Zealand to take in the sites of Hobbiton (a.k.a. Matamata) appeals to the biggest trend in the tourism market today: intergenerational tourism, that is, grandparents, children, and grandchildren traveling together. For example, someone may want to visit the gardens of Fernside Lodge, while another person will want to see Lothlorien…and they’re both visiting the same location.

“You’ll be able to walk through the natural countryside and take in those scenic panoramas, that’s really well kept as in the movie…. In New Zealand, a percentage of what you see on screen you can see in real life. We’re not trying to sell the movie. We’re trying to say the sense of awe and grandeur that you get with the movie is very much what you’ll get with the experience.”

In fact, tourism is not the only industry that has had a boost from Jackson’s movies. Other jobs have been created as a result of the studios co-created or co-owned by Jackson, which include Weta Workshop, Stone Street Studios, Park Road Post Production, and others.

Does this mean director Peter Jackson has personally increased the GDP of New Zealand? Although it’s difficult to put into numbers, it’s clear that the little-film-industry-that-could has positively affected the economy of New Zealand.

Anderson said, “The screen industry itself is an estimated NZD$3 billion, so we’re not the hugest player on a world scale, but it supports 2700 businesses, and New Zealand is a country of small businesses. And of that, 95% are involved in production and post production work. And out of all of that, 80-90% percent of that screen revenue is contributed by North American productions.”

The government of New Zealand recognized the importance of the industry, specifically the contribution of Jackson’s upcoming The Hobbit when the New Zealand postal service issued stamps with the faces of characters from the movie, as well as uncirculated commemorative coins. Entertainingly, the New Zealand Custom Service currently stamps visitor’s passports with a “Welcome to Middle Earth” stamp.

The New Zealand government’s recognition also extends to tax incentives offered to large scale productions.  (Anderson noted that two of the top six highest grossing movies of all time, Avatar and Lord of the Rings: Return of the King, were filmed in New Zealand.)

It’s not just the government basking in the glow of movie magic. Air New Zealand has not one but two 777 airplanes decorated in a Tolkienesque theme—and let’s not forget their clever Middle Earth-themed safety video. And to celebrate the release of The Hobbit in New Zealand, a Kiwi weather reporter gave his forecast in Elvish.

Citizens of New Zealand—all 4.4 million of them–are also enjoying their one-degree-of-separation fame, a consequence of New Zealand‘s unexpected journey. “During a fight scene in Return of the King,” Anderson said, “I can see my niece’s horse.”