The Last of Us: 3 Minutes of Spine-Tingling Gameplay 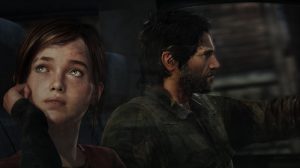 With their Uncharted series, Naughty Dog proved they could do Indiana Jones-style adventures right. After watching these particular three minutes of gameplay of The Last of Us, which will be released on May 7, 2013, it doesn’t take long to see that the game company will be conquering the zombie apocalypse genre too.

I don’t know how those lucky bastids at GamesHQMedia got the opportunity to play these particular three minutes of PS3 goodness. I only know that my envy is tempered by the delightful fear I feel when watching their video. We get to see our protagonist Joel wander through a dark train station filled with the cordyceps-infected undead, taking them out one at a time in various stealthy (and not so stealthy) ways. He’s assisted by Ellie, who whispers suggestions to him.

Although walking through this environment with the undead and their creepy undead sound effects was deeply unsettling, I believed that Joel’s arsenal of weaponry and skills makes him a competent guide.

That is, until the very end.