The OTHER Top 10 Best ‘Star Trek: Next Generation’ Episodes (and None Are ‘The Inner Light’) 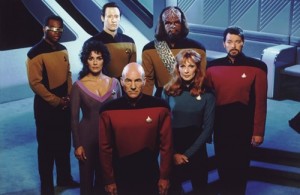 Today is the 25th anniversary of Star Trek: The Next Generation, the series that picked up eighty years where Captain Kirk and his crew left off in Star Trek. For seven seasons (and four films), the crew of the Enterprise-D went where no one had gone before. Time to celebrate.

So why did I call out “The Inner Light?” It was an episode that I didn’t like as much as everyone else, because real life intruded on my experience of it: Before the episode aired, I had got my hands on a script. The prose was so beautiful that it gave me an actual lump in my throat. So when I saw the episode, the impact was lessened because I knew what was coming next.

Here is my other top ten list, which is in no particular order:

Recurring character Lwaxana Troi, ship’s counselor Deanna Troi’s interfering and overly flirtatious mother, falls in love with a scientist, Timicin. But soon Lwaxana learns that, because of his planet’s “resolution,” he has to die at age 60. Soon, Timicin is convinced that he wants to live…but this decision has painful consequences.

This episode includes a devastating take-down by Timicin’s daughter Dara (played by future Ensign Ro, Michelle Forbes), who wants to see him buried beside her mother.

In the clip, below, Lwaxana and Timicin have a very frank discussion about aging and society:

Young Wesley Crusher falls in love with the dauphin of Daled IV, Salia, who is en route to her new planet. When the young girl returns his affections, Salia—and her extremely overprotective governess—are not exactly as they seem.

Watch the clip, below, for a look at the episode’s best scene, where Commander Will Riker and Guinan teach Wesley how to flirt: