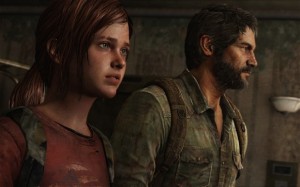 Warning: This articles describes parts of the end of The Last of Us, including one of the climactic scenes. If you plan to play the game, you have been warned.

When videogame reviewers receive advanced copies of games, they come with the condition that we’re not supposed to reveal details about the ending. So I had to keep certain points to myself as to why I believe that The Last of Us (TLoU), the latest release from Naughty Dog, deserves an 8, not a 9 or the hallowed 10. It’s a good game, and it deserves to be played, but there are flaws. And one flaw is very specific to the ending, which I wasn’t able to reveal. Until now.

Before I get to that, although I enjoy the game’s very slow pace on an intellectual level, in actuality, I found myself annoyed by the slowness of the action. Yes, this is how it happens in real life. But if I wanted to take a cross-country journey on foot as Joel and Ellie do, I’d be hoofing it across Utah right now. When I play a videogame, it’s because I want to have an adventure.   That, and a few other issues I mentioned in my review, brought the game down to at most 9.

There are other reasons TLoU doesn’t necessarily earn a 9, because in addition to the slowness of the action, I had some issues with the slowness of the plot as well. But it was the game’s climax, where Joel makes an important decision with world-changing consequences, that clinched my rating of an 8 rather than a 9.

Last chance to turn back if you don’t want spoilers.

During the course of the game, Joel and Ellie make their way west, looking for a group of freedom fighters called the Fireflies. It turns out that Ellie had been bit by a cordyceps-infected enemy, and yet she did not turn into an Infected. Ellie, it seems, is immune to the fungal plague. Or rather, immune to the consequences—she is infected, but for some reason, the fungus has not taken over.

After much traveling, fighting, killing and egads, cannibalism, Ellie and Joel finally find the Fireflies…who immediately capture Ellie and are about to split open her skull and dissect her brain to see exactly how she’s different.

And that’s when Joel steps in.

A word about Joel: In the beginning of the game, we see him in a relationship with a fellow smuggler named Tess, and theirs is about as unsentimental a pairing as I’ve ever seen. You can tell that Joel and Tess were partners who relied on each other. But what they had together…it wasn’t love. It was a brilliantly realized relationship. And it set up the idea that Joel is not someone who shares his feelings with anyone.

Joel and Ellie’s relationship was not an easy one, and only after many months together did he learn to think of “him” as “them.” Even though Ellie’s death and dissection could mean a cure for exactly what plagues humanity, Joel’s decides to rescue her instead.

It made perfect sense to me that Joel would sacrifice the world so she might live. But not the way it happened:

Joel finds Ellie in a dingy operating room. She’s on the table, sedated, surrounded by medical staff, but they haven’t killed her yet. Joel has to stop the doctor from operating. Joel, who has shot, stabbed, and Molotov-ed his way past the heavily-armed guards outside, finds himself held at bay by the head surgeon, wielding a scalpel.

At this point I really wanted Joel to say, “Did you hear the gunfire a moment ago? Step aside.” Or just push past the doctor, perhaps punching him out. But no, the surgeon is immovable, and the room’s arranged so there is no way I can get around various pieces of medical equipment to rescue Ellie.

I tried to move equipment. I even tried to leave to see if I can trigger an alternative “Joel lets them kill her” ending. No dice. I can’t leave.

As time ticks by, the surgeon and nurses stare at me impassively.

A scalpel is not a serious threat. Not to Joel, who’s crossed the country on behalf of the girl on the table. Surely the game isn’t going to make me shoot an unarmed surgeon? How many qualified surgeons are even left in TLoU’s crumbling world? Ah, perhaps I can knock him out?