The Trailer for the Upcoming ‘Mass Effect: Paragon Lost,’ Disappoints 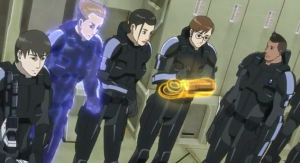 The first Mass Effect game is an RPG by BioWare about Commander Shephard’s journey to become a Spectre agent while fighting such enemies as the Geth, the Reapers, and other Spectre agents. It was so playable and fun that it spawned sequels, books, and comic books. Now the franchise has a new entry: an upcoming anime movie, Mass Effect: Paragon Lost. I have the trailer for you, below.

Written by Henry Gilroy (Star Wars: The Clone Wars), Paragon Lost is a prequel to Mass Effect 3. Although it seems that Shephard won’t be making an appearance, this film centers around James Vega, a character in Mass Effect 3 who is voiced by Freddie Prinze Jr. In the film, Vegas and his team must protect a colony from abduction.

I was really looking forward more Mass Effect…but then I saw the trailer. Sadly, the animation isn’t very polished. (I’m thinking 1990s work.) A good story could win me over, but I didn’t actually get one. I did see a few Krogan, so I can hope for some snappy one-liners.

At least the title, Paragon Lost, is catchy as hell.