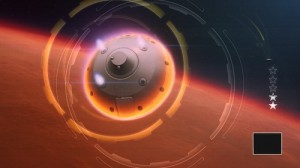 I’m a PS3 gamer (Uncharted FTW), with minimal experience with the Xbox. Xbox players have the advantage if you want to play Halo, Fable, and a slew of dancing and Kinect games. But Kinect Star Wars aside, there hasn’t been a game that has made me want to convert. Until now.

Martian fans can help NASA test-drive a new 3-D interactive experience that will allow the public to follow along with Curiosity’s discoveries on Mars. Using Unity, a game development tool, NASA is pushing new limits by rendering high-resolution terrain maps of Gale Crater, Curiosity’s landing site, collected from Mars orbiters. A 3-D “virtual rover” version of Curiosity will follow the path of the real rover as it makes discoveries.

Players will be able to virtually “land” the Curiosity rover, which is currently en route to the Red Planet and should be arriving on August 6, 2012. But NASA wants you to download Unity now to help them beta test the virtual rover before the actual landing in early August.

The experience allows users to take control of their own spacecraft using Kinect and face the extreme challenges of landing a rover on Mars. The game will be hosted in the Xbox Live Marketplace and in a special destination on the Xbox Live dashboard dedicated to the Curiosity rover. The dashboard will also include pictures, video and more information about the mission.

iPhone users can get in on the action with the iOS app, “Curiosity on Mars,” for $0.99, which will send you video releases, podcasts, and even tweets. Microsoft for Windows Phone will have a Mars app as well. But NASA will have an entire series of exploration apps for PCs running the upcoming Windows 8. (Windows 8 is now in beta but will be officially released in late October.)

I don’t always like everything NASA does, but I love it when they do what they’re best at: space exploration. The Administration is also savvy enough to realize that it has an opportunity to engage the public in one of its project–something it hasn’t always been good at in the past.