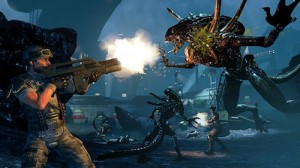 Although I had fun shooting xenos in Aliens: Colonial Marines (A:CM), even I could see that the game looked, as I had put it in my review, “surprisingly coarse,” especially when you consider that Gearbox Software had theoretically put seven years’ worth of work into the game. It turns out there’s a very good (or very bad) reason it looked as dark and outdated as it did.

Jason Schreier of Kotaku, who did some excellent reporting in his article here, quoted an anonymous source who said, “The game feels like it was made in nine months, and that’s because it was.”

According to Scheier, Sega had acquired the rights to the Aliens saga in December 2006 and had hired Gearbox to develop an FPS game. But instead of rolling up their sleeves and diving into A:CM, the Texas game developers apparently instead focused on Duke Nukem Forever. Then Borderlands. Then Borderlands 2. Anything, it seems, but the continuing adventures of some seriously traumatized marines and the aliens who love to hate them.

At the end of 2010, Gearbox outsourced the development of A:CM to a company named TimeGate.

So Gearbox sent over the game materials, and TimeGate’s team started to work on project Pecan—although at least a few staffers were shocked by how little progress Gearbox had made on the game.

“There was obviously not four years of work done on the game,” one source said.

TimeGate dove into development work, either retooling previous assets or creating them from scratch. Schreier describes a scene familiar to many inheritors of projects: Although TimeGate was responsible for development, the company had no executive power. It had to answer to both Gearbox and Sega, whose visions were conflicting. (It seems that Sega had wanted a game that resembled Call of Duty.)

In 2011, TimeGate started facing big problems. The first major problem was the game’s story: even four years after Colonial Marines was announced, nobody had locked down a final script. Narrative designers at both Gearbox and TimeGate were writing and rewriting constantly, and TimeGate had to discard entire scenes and levels because of story changes during development, according to three sources.

(Note: Although not having a final script after four years is not the best way to progress a videogame, rewriting and deleting scenes is part of the writing process and should not necessarily be considered a sign of trouble.)

After TimeGate had spent over a year and a half on A:CM, Gearbox took the game back in mid-2012 and reworked it again, dropping down the game’s textures to a lower resolution, which had already been scaled back in order to meet the requirements of the PS3 and the Xbox 360.

The result? A game that looked more 2003 than 2013 and one that disappointed many hardcore fans.

There could be a light at the end of this tunnel. And it’s not just the upcoming DLC (and surely Gearbox will be putting its entire workforce on the job). Remember that demo that had proved A:CM had once been a more polished-looking game? That demo, created for a highly specced PC, exists somewhere in code form.

Perhaps one day soon, we can get our hands on it…and our squad on a better-looking version of LV-426.