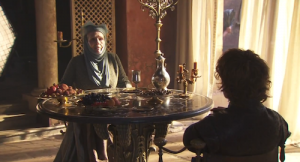 The latest Game of Thrones production video is here, to remind us that “winter is coming” and so is season 3. Unlike the ultrashort teaser trailer, which provided plenty of style but no substance, “Making of Game of Thrones: Molding the Book into a Series,” gives us actual glimpses of most of the main characters we’ve grown to love and/or hate.

As Bryan Cogman, executive story editor/writer, provides a narration about his work, we see Daenerys Targaryen, Tywin Lannister, Catelyn Stark, and many, many others.  Cogman says that season 3 is filled with “character-driven scenes, where you’re really getting under the skin of the characters…I think on this show that’s as thrilling, if not more thrilling, than some of the flashier stuff.”

Of course, knowing the book as I do, I can assure you that A Storm of Swords has more than a little flash. However, it’s the characters that make Westeros a real world, and if this season follows the book, we can expect some award-winning dramatic scenes.

But knowing the book as I do, I know there isn’t a scene where Tyrion sits down at a table with Olenna Redwyne, played here by the fabulous Dame Diana Rigg. But in this video, below, we see a brief look at just that. It’s as if the producers said, “Hey, let’s put Dame Diana Rigg and Peter Dinklage in a scene together and watch what happens.”

So even though I don’t precisely know know what happens, I’m pretty damned sure it’s going to be awesome.