Thunderbirds Are Go! for a Remake. But Will It Have Puppets? 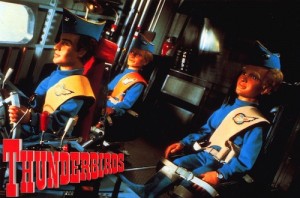 Thunderbirds was a 1965-1966 British science fiction series that had it all: Heroic do-gooders. Malign evil-doers. Spaceships. Gadgets. Puppets. Submarines. Wait, what was that other thing? Did she say “puppets?” Yup(pets). Thunderbirds was made in “supermarionation,” because although it had many ingredients for a stellar television show, what it sadly lacked was a budget. Now Thunderbirds, which inspired the look of the 2004 film Team America: World Police, is getting a remake. Only this time, Weta Workshop will have something to say about the casting.

“The new series will be produced using a unique mix of CGI animation and live-action model sets while also paying tribute to the legacy of model locations from [creator Gerry] Anderson’s original.”

“A unique mix of CGI animation and live-action model sets” sounds strikingly similar to the motion-capture technology that has been previously employed by Weta Workshop’s other works, The Lord of the Rings, The Hobbit, The Adventures of Tintin, and King Kong. However, it isn’t clear exactly what the new Thunderbirds will look like…or even if the actors will appear on screen rather than merely voicing characters.

I’m excited about a remake of the show, which managed to make viewers forget they were watching puppets with its British Invasion spy thriller cool.

And speaking of the British Invasion, check out the theme song, below, that was written for the show and sadly never used. It’s a treat.

UK Channel ITV has ordered twenty-six half hour episodes for 2015. There is also no word on where and when it will air in the U.S.