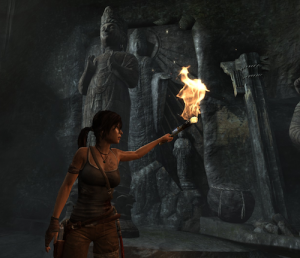 “I hate tombs,” Lara Croft says as she’s standing in the middle of, whaddya know, a tomb. Although we’ve seen many a crypt in her future, Lara in Tomb Raider (2013) is a younger, more squeamish version of herself in this thoroughly enjoyable origin story. Our tomb raider is almost a tomb afraider.

But raid she does. Lara’s journey from young researcher to heroine is only part of why this game is fun to play. With climbing, jumping, and to-ing and fro-ing across an island filled with mysteries, there’s enough action here to keep every gamer happy.

Tomb Raider fans will notice this game has fewer puzzles to solve than previous iterations (mostly in the games’ few mini-tombs), and our heroine doesn’t perform mid-air somersaults as her older self does. But there’s enough sliding, lighting torches, and wading through water to placate ardent fans of the series. No dinosaurs, though.

Lara and her colleagues, who set out to find the lost kingdom of Yamatai (a genuinely lost realm), find themselves shipwrecked and stranded on an island. Worse, Lara is immediately knocked out, only to find herself strung up in the rafters of a lair. She escapes the hard way (ouch) and looks for her chums.

Soon, she acquires a two-way radio…and a bow and some arrows. Say hello to my little friends.

Lara takes shelter at an abandoned campsite, one of the many that serve as a checkpoint and a place for her to gather her thoughts (which we can conveniently overhear). Campsites are also the place where we can spend whatever skill points we acquire as Lara gains experience. Although there are three skill sets in which to place your points (Survivor, Hunter, or Brawler), the skill tree doesn’t really branch, kind of like a royal family tree.

Some of these points are more appealing than others. For example, we can choose to place a point toward finding extra salvage (i.e., game currency) from crates…or we can earn extra rewards when, eek, looting animal corpses. We create some of those corpses too: Lara has to hunt to survive at the start of the game, and them deer is good eatin’. However, she feels remorse for her carnivorous diet.

Thanks to her two-way radio, Lara hears from her friends and seeks them out. The terrain isn’t vast, but it’s large enough to be confusing, particularly in the beginning when you’re getting your bearings. If you get really disoriented, we can select a wonderful “instinct” mode that highlights Lara’s current destination; this instinct also highlights objects that we can interact with in the area, like fires from which we can light our torch and bodies we haven’t yet looted. Finished using instinct? Shake it off just by stepping forward. Neat.

The more literal-minded could just use the map, which not only shows our location, but also Lara’s current objective, as well as collectibles such GPS caches and relics Lara has found. The map may also show yet-to-be discovered items (think Assassin’s Creed’s treasure maps). Listed on the map screen are also bonus achievements to accomplish, and these are different from area to area. So in one area, I shot out some lanterns to earn experience; in another, I had to find and light braziers. It’s a nice way to spice up gameplay.

The game is open world-ish, that is, we have freedom to explore, but only in the current area; no free-roaming the island a la Far Cry 3. Mostly we’ll play through each area as part of the plot and explore it later (especially after you acquire fast travel, which we can use from our basecamps). Most of these areas are middling in size, though the game does an excellent job of making them feel expansive. It rewards inquisitiveness too, so we’ll want to keep moving. And as we progress through the game, our abilities—and our arsenal—grow. We can unlock upgrades to our weapons, too, both with salvage that we loot from crates (and bodies) and occasional weapon parts.

Some may notice clean, white ropes that stand out in this lived-in landscape. We don’t get the ability to interact with them until about a third of the way through the game, when we learn that they’re used for, among other things, zip-lining (and zip-lining is awesome). It was a bit frustrating, looking at the pristine ropes, knowing that you can use them eventually but can’t quite yet…kind of like playing through LEGO Star Wars without a Clone trooper.

As for weapons, Lara has access to only four of them (bow, pistol, rifle, and shotgun; five if you count the axe in melee), cuz consoles. Although the shotgun is nice, nothing beats the arrows for silent kills. And there are a great many enemies—human and animal—to take down. This is definitely an action game with a few puzzle elements, not a puzzle game with action elements.

Unfortunately, the game falters slightly in some action scenes: I  encountered a vertical crevice where, once I entered, I could only go up, not down. I had to press the “forward” key to get to the top, but it might as well have been a cutscene. Tomb Raider suffers from quite a few of these events: You’re not so much playing the game as the game is playing itself.

This is also true for parts where Lara needs to be stealthy. She automatically falls into a crouch posture. In a way, not being able to direct her to skulk means we’re playing the game less. And if we’re playing less, why bother playing at all?

As I mentioned, Lara is trapped on an island, and she has to rescue her friends. It turns out they’ve been captured by evil worshippers of the goddess Himiko. At points, I was reminded not of Raiders of the Lost Ark, but of Indiana Jones and the Temple of Doom: What with the corpses and the unattended candles, it’s like the island had been populated by a Kali cult.

Holy smokes, Tomb Raider is surprisingly brutal. Lara dies frequently and horribly. At one point, when impaled upon a tree, we see her lips quiver as her life gives out. Getting torn apart by wolves was also another death I hope to never experience again. Plus, what with all of those bodies in various states of decay strewn around different parts of the game, the sequel should be titled Tomb Raider and Post-Traumatic Stress Disorder Survivor.

Or J.J. Abrams’ Tomb Raider. There’s quite a lot of the TV show, Lost, here. You’re stranded on a mysterious island with a mysterious cult, much like the Others. The island won’t let you leave, and nearby planes fall out of the sky. When Lara is forced to get to a high point to broadcast a signal, I thought, “Now you’re just messing with me.”

Lara herself is perfectly pitched as an out-of-her-element young adult thrust into situations beyond her control. We know she’s scared, but she knows she needs to help her friends. She also  winces when she’s in pain. There’s none of Nathan Drake’s nonchalant “just-a-flesh-wound” here. She’s exactly what I’d expect in the origin story of the character we know she’ll grow into.