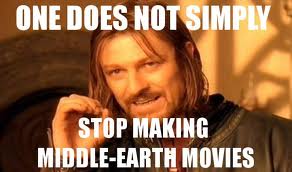 As Boromir (Sean Bean) erroneously mentioned in Lord of the Rings: The Fellowship of the Ring, “One does not simply walk into Mordor.” He was not only proven wrong by Frodo and Sam (In your face, man. In. Your. Face), but also he created an Internet meme that was riffed on this time last year by Google maps. And now others want to prove how wrong he was…by walking into Mordor.

Two fans, Kerry and Chris, decided to walk to Mordor, or in this case, from Matamata, the stand-in location of the Shire where Frodo and his loyal pal Sam departed to Mount Ngauruhoe, which doubled as Mount Doom. It’s a full 120-mile journey. To make the trip a little more adventurous, they gave themselves a mere six days. Will they make it?

From the looks of things, it’s hard to tell if they’ll be successful in returning their official ring to Mount Doom. But it’s an entertaining—and yes, unexpected—journey to enjoy.