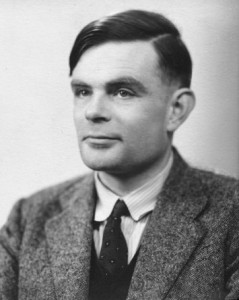 Recently, over 23,000 people signed an online petition to ask the UK government to pardon Alan Turing for homosexuality, considered the crime of “gross indecency” by the Labouchere Amendment of the Criminal Law Amendment Act 1885. Yesterday, the motion was dismissed by the House of Lords. Considering that Turing performed stellar and unique service to the British government during World War II, and his work provided much of the basis for the modern computer, this is unconscionable.

Alan Turing (1912-1954), who is known as both the father of computer science and the father of artificial intelligence, mechanized the decoding process of the German’s most important code during World War II, Enigma. Prior to Turing’s work, only 50 Enigma messages could be decoded in a week; Turing’s “bombes,” (derived from work by Polish cryptographer Marian Rejewski and smuggled out of Poland ahead of the German invasion), decoded 3,000 messages per day.

In 1952, after he was arrested, Turing was given a choice between chemical castration and prison. He chose castration. Still, his security clearances were revoked, and he was barred from consulting work. He committed suicide by eating an apple laced with cyanide in 1954.

According to Justice Minister Lord McNally,

“It is tragic that Alan Turing was convicted of an offence which now seems both cruel and absurd, particularly… given his outstanding contribution to the war effort,” he said.

“However, the law at the time required a prosecution and, as such, long-standing policy has been to accept that such convictions took place and, rather than trying to alter the historical context and to put right what cannot be put right, ensure instead that we never again return to those times.”

To be fair, if the United Kingdom pardoned every person it had wronged, the British government would grind to a halt in the onslaught of absolution (the US too, for that matter). And as Lord McNally pointed out, there’s also a technical difference between overturning a conviction for being a miscarriage of justice, and overturning one because the law itself was unjust.

Then there’s the question of precedent: if governments can forgive people for acts that have retroactively been decriminalized, such as homosexuality, does it mean that governments can now also charge people for crimes that only recently came into existence, and weren’t crimes at the time the acts were committed? It’s an unsettling thought.

Former prime minister Gordon Brown did offer an official apology to Turing in 2009—but an apology implies a wrongdoing on the government’s part, while a pardon suggests absolution.

Pardoning Turing wouldn’t change the wrongs done to him and to all homosexuals prosecuted by Victorian laws. But it would be a humane gesture that cements the UK government in the 21st century rather than the 19th.

For some idea of how important Turing was to both the Allied victory in World War II and the development of the modern computer, see his Wikipedia entry here.