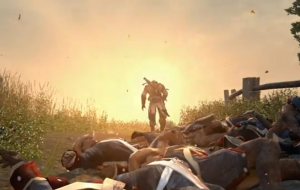 Yesterday we saw two new trailers for Assassin’s Creed III, the latest game in the popular stab-’em-up series, one for the US markets and one for the UK. Guess which one is more historically accurate?

The UK trailer is longer than the US one by eighteen seconds, much of it violent. However, there’s a particular distinction to be made: The UK trailer contains snippets of our protagonist killing Americans, while the US trailer does not.

These two trailers, below, give us more of the personal story of Ratonhnhaké:ton, a.k.a. Connor: half-English, half-Native American, all Assassin. Because Connor is fighting a completely different war (one against the Templars) than the combatants around him, some of his enemies happen to be dressed in blue rather than red.

It’s unsurprising that Ubisoft left out that part in the US trailer. After all, many Americans still consider the American Revolutionary War to be a battle between the United States vs. the British Empire, rather than the actual battle between the United States, the British, our Native American allies, their Native American allies, our European allies, their European and Canadian allies, our freed/enslaved African Americans soldiers, and their freed African American soldiers.

And as Connor reminds us in a victory for historical accuracy, not every colonial fought for the United States.

Sadly, this trailer doesn’t give us much gameplay. We have a lot of to-ing and fro-ing, but not a lot of assassin-ing. I’m looking forward to a more full-blooded trailer.