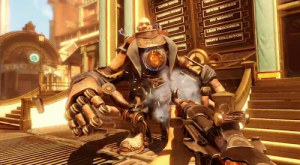 BioShock Infinite will be released on March 26, and to tempt players to preorder, Irrational is offering what they call the “Industrial Revolution Pack.” This pack gives you boosts your speed, your—heck, you can see it for yourself in the trailer, below.

The Industrial Revolution trailer shows us just how much like BioShock and BioShock 2 that BioShock Infinite will be: Your protagonist has a gun in one hand and the use of powers in the other. There’s a Big Daddy-ish character we have to fight. And there’s an Andrew Ryan-esque voice over.

Obviously, the games are very different, and not just because they take place in different worlds. It seems that the world of Columbia is more densely populated than the ravaged Rapture. But to me, Columbia is more appealing because it’s more attractive and filled with light. Rapture was dark—perfect for the game, but not a place I would want to visit.

Oh, and check out the puzzle game that comes with the preorder bonus. I’m thinking Cogs. But this game has an advantage: According to Irrational, this game “unlocks stories of Columbia and allows players to pledge their allegiance to the Vox Populi or Founders through Facebook.”