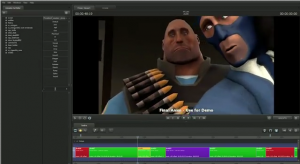 Valve Software, the creators of some of the world’s most beloved videogame series,  Half-Life and Portal, has announced the beta release of their new animation tool, Source Filmmaker (SFM), designed to give filmmakers their own limited, yet extremely powerful, film studio.

According to the introductory YouTube video, below, with the SFM, users “can animate, create posters, and make movies, all by repurposing the videogame world into a virtual movie studio.”

The “videogame world” that Valve mentioned is Team Fortress 2, and currently users are limited to a cartoonish spy-themed alternate 1968. But within this world, users can “reshoot, reanimate, and re-edit it to make it [the footage] your own.” This includes changing character expressions and creating new motion. Plus, Valve says that the amount of resources will eventually increase.

According to Valve’s SFM website, users “can think of the SFM as a virtual movie set with lights, actors, props and cameras.” Animators and filmmakers now have a tool that will save them dozens, if not thousands, of hours behind a drawing board or Wacom drawing tablet.

Did I mention that this tool is free and needs only a Steam account and some hardware requirements? (UPDATED: There are a limited number of beta keys available, so the James Cameron wannabes should sign up sooner rather than later, although Valve will eventually releasing the SFM to all takers.)

Better yet, filmmakers can even make money with the films they make with the SFM…but only if they keep their hands off of Valve’s assets.

The SFM site writes, “In the past, we found that giving away our tools for free leads to the community creating amazing things for themselves and for others…. We can’t wait to see what amazing creations you make with the SFM.”