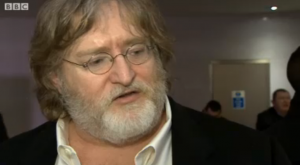 Ever since the announcement in January, fans have been anticipating Valve’s Steam Box, a platform for Steam-based games that will serve as a competitor to the incumbent Sony, Microsoft, and Nintendo systems. But now we have more of an idea when the Steam Box will turn from gamer fantasy into gamer reality: Valve’s co-founder Gabe Newell told the BBC that Valve will be giving prototypes of the game to customers in three or four months.

Interestingly, Newell also said, “We’re working with partners to nail down exactly how fast we can make it.”

“How fast we can make it” says to me that Newell has a desire to release the Steam Box sooner rather than later. Had Newell wanted Valve to take their time about the release of the Steam Box, he would have said, “It’s in the early stages of development.”

Considering the PlayStation 4 will be released in late 2013, and games like the reboot of Thief are already in development for the soon-to-be-announced Xbox 720, it seems that Newell wants to get in on the new console action. I’m predicting that if the prototype works according to, well, type, we can expect a worldwide Steam Box release also for 2013.

There’s unfortunately no word on how these prototype Steam Boxes will be distributed. Will customers who have purchased the most games, or even certain types of games, be considered as a test player for the Steam Box? Will customers outside of the United States have access? Can I have one?