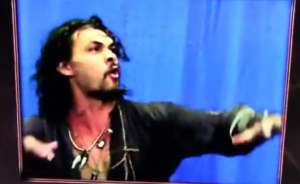 For his audition for Game of Thrones, Momoa performed a haka, the ancestral war dance of the Maori people. Although this traditional dance is supposed to inspire fear, coming from Momoa, it just made me laugh and laugh. Ya see, I’ve seen him speak at conventions, and he seems to be a laid-back kind of guy. So it was extra fun to see him whip out his mad dance skills.

This audition worked. The role of Drogo required a ferocious physicality and an ability to speak in a foreign tongue, and a haka is the solution to both.

Check him out. And while you’re at it, take a look at a haka, below, performed by the rugby team, the All-Blacks, before each game.