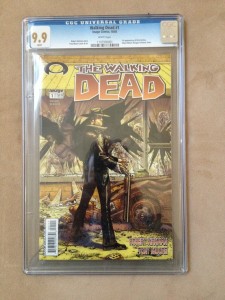 The Walking Dead is AMC’s engaging, bloody horror show that sends chills up the spines of the living. But before it was must-watch TV, it was a critically acclaimed comic book. And one person has acclaimed it more than others: A buyer, whose name is redacted for privacy, recently purchased it on eBay for $10,100.

The seller, FlyersComics, had the issue graded and encapsulated by the Certified Guarantee Company, which gave the book a desirable 9.9 rating. FlyersComics wrote in the eBay description (in ComicSans, of course), “This is an investment as The Walking Dead is now a permanent part of our pop culture and continues to grow in popularity.”

The winner who emerged victorious after one-upping forty nine other bids was also charged $35 for shipping from Port Coquitlam, B.C. (If I had spent $10,100 on one comic, I would want the seller to toss that in for me.)

One of the reasons for this kind of demand for The Walking Dead #1 is that there is relatively little supply. According to The Daily Dead, Image Comic’s publisher Eric Stephenson said that the first issue had a print run of only 7,300 copies.

Note to budding collectors: Although first issues have more cachet than the second, The Walking Dead #2 is actually more rare. Stephenson said that only 5,400 first-run issues were printed.

Does this mean the comic was as slow-moving as a zombie?