‘Walking Dead’ Finale Faces Off Against ‘Game of Thrones’ Opener on 3/31. Who Wins? 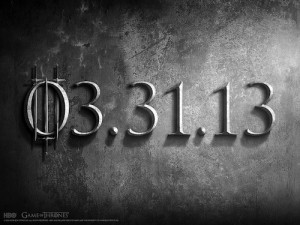 Bad news, genre fans. In an epic clash of bad timing, the season finale of The Walking Dead’s third season finale is thirsting for our brains on March 31 at 9 pm…the very hour Game of Thrones’ third season opener will have half of Westeros taking revenge against the other half. What’s a loyal viewer of both to do?

Although these important life decisions are easier to make with DVRs that record one episode while we’re watching the other, only one of them can give us that instant gratification of watching it as it airs. So I’ve created a handy guide to determine which show deserves your undivided attention at 9 pm.

Winner: The Walking Dead. Although GoT has their own form of zombie in the form of white walkers, TWD’s raison d’être is to show as many of the brain-eaters as inhumanly possible. Raaagh!

Winner: The Walking Dead. GoT does not shy away from violence. Far from it. In season 1, Khal Drogo ripped a man’s tongue out of his throat…through his goddamned esophagus. (Seriously, WTF?) But the walking dead in TWD are utterly horrific even when they’re on the ground. When they’re in motion, they’re even more gore-tastic.

Winner: Tie. All of the people I know who are smitten by men are smitten by Darryl in TWD and Jon Snow in GoT (except me. I’m smitten by Tyrion). If there is an edge here, this category would be won by GoT because there are so many more male characters to crush on.

Winner: Game of Thrones. Although TWD is full of strong, confident zombie killers like Andrea, GoT has Daenerys.

Winner: Game of Thrones. TWD had a cute moment recently where Glenn and Maggie wanted to get naked together in the watchtower, but Glenn couldn’t perform while the undead were watching. In GoT, people perform in every circumstance, all the time. All. the. time.

Winner: Game of Thrones. There are more betrayals per square inch of GoT (e.g., Mirri Maz Dur’s slow kill of Khal Drogo, Petyr Baelish screws over Eddard) than TWD. But it doesn’t mean that Lori’s not telling Rick about her relationship with Shane for most of season 1 doesn’t hurt.

Winner: Tyrion Lannister. I mean, Game of Thrones. TWD has excellent dialog and some amusing moments. However, only Tyrion Lannister can confess his crimes in so amusing a manner.

Do you like death to come unexpectedly and without warning?

Winner: Tie. Eddard Stark’s death in season 1 of GoT was shocking. Just as shocking in TWD was death of prisoner Axel, who was taken out the very moment we started to like him.

Winner: The Walking Dead. Although GoT’s characters are very real and likeable, TWD takes place in the here and now. Also, GoT has too much as-yet-unexplained weirdness (what was that thing that killed Renly?)

Do you love to hate people?

Winner: Game of Thrones. TWD has the Governor, and he is quite loathsome. But no one is as loathsome as Joffrey. Last season, I kept a “slap meter,” to celebrate every single time someone had slapped him. (And who can forget this YouTube video?)

Do you like your TV series based on books that actually have endings?

Winner: Tie. They both lose. GoT has been a series, A Song of Ice and Fire, since 1996. The Walking Dead comic book has been running since 2003. George R.R. Martin probably has more fans clinging to his ankles begging him to finish, though. Also, George, please finish. Thanks.

Do you like knowing who the good guys are?

Do you prefer following a few characters in one location over tracking more characters than you can remember all over the map?

Winner: The Walking Dead. Although TWD’s characters are in fact spread out over separate locations (e.g., Andrea in Woodbury, Rick and co. in the prison, Glenn and Maggie out scavenging for supplies) GoT’s characters are spread out over different continents. This will only become more sprawling as the series continues. (At least the people who do the title sequence will have plenty to keep them busy.)

Do you like having children as major viewpoint characters?

Winner: Game of Thrones. In GoT, you have Sansa, Arya, Bran, and Joffrey (not to mention Rickon and Arya’s fellow travelers). In TWD, you had Sophia, but not for long. Now there’s only Carl. (When the show started, Beth was 17, but she’s probably 18 or 19 at this point.)

Winner: Game of Thrones. TWD’s scenery is decaying or just plain bleak. Although parts of GoT are even more desolate (see North of the Wall), others are just stunning, particular the parts that were filmed in Dubrovnik, Croatia.

Winner: Tie. Although you would think GoT wins on epic battles because of the episode “The Battle of Blackwater,” TWD has more than its fair share of skirmishes—I’m thinking of the end of season 2, when the farm was overrun, for example.

Do you think it will all work out best in the end?

Loser: You. I believe both shows will end with every single character lying dead in pools of each other’s blood. You want everything to tie up nicely? Go watch My Little Pony. Friendship is magic, baby. So are happy endings.

Final Score (not including ties):