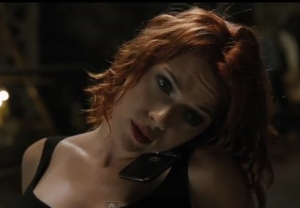 I’ve been waiting to see The Avengers ever since I heard the words “Joss” and “Whedon.” And in the first clip of the movie, below, you can see why: The famed director is great to his female characters; he makes them real and interesting and tough. Black Widow, played by Scarlett Johannson, is no exception. How tough is she? Well, she starts the scene tied to a chair, about to be interrogated. Let’s just say she doesn’t take this sitting down.

Yes, Joss is good to all of his characters–up until the moment he kills them.

I don’t know if Marvel would let him eviscerate a major player in The Avengers, especially since most are earning big money in their own individual films.

This could only mean one thing. Agent Coulson, we hardly knew ye.