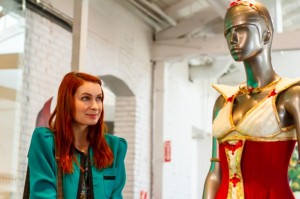 It seems like only yesterday that Cyd Sherman, a.k.a. Codex, was fired by her therapist for not setting limits on the time she spent in her MMO. Now look at her. She’s as charmingly neurotic as ever, only this time she has a job for the very same MMO. And that’s the set-up for season 6 of The Guild, the show that made Felicia Day a small-screen star.

It seems like only yesterday that Day, a.k.a geek hero, was an MMO gamer herself who decided to create a series based on her experiences. Now look at her. She has her own YouTube Channel, Geek & Sundry, and gets the occasional plum role, such as Dr. Holly Marten in Eureka.

Season 6 will be appearing on YouTube on October 2, where presumably Cyd will find herself in some sort of hot water, and she leans on her Guildies for help. (With any luck, we’ll have more cameos, only this time, from within the gaming industry.)

Are we there yet?

Not enough for you? Check out one of the season 6 production diaries, here. You can find the others at Geek & Sundry.