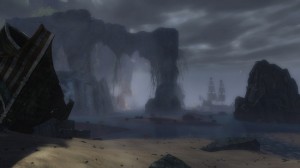 ArenaNet recently announced that Guild Wars 2 (GW2) will launch “a massive one-time world event” on November 16th, noon PST, which they’ve named “The Lost Shores.” The event will consist of several phases that unlock in turn, similar to the only just completed Halloween special event, “Shadow of the Mad King.” If it’s anything like the Halloween event, November 16 should be a date in every Guild Warrior’s diary.

Although ArenaNet has announced the date of new event, the company has offered us almost no details, giving fans much room to speculate. Although GW2 is a relatively new MMO, we do have the previous event to help us frame what the next event may have in store for us.

Obviously, there will be new content in “The Lost Shores,” and judging by the three available screenshots, it will involve the sea. “Shadow of the Mad King” didn’t just have new content: It had an impressive amount of content, touching every aspect of the game. We received extensions to the crafting system using candy, a treasure hunt for the Mad King Thorn’s life story, and a special one-off dungeon, “Ascent to Madness” (which, alas, I missed out on). All that, plus the invasion of Lion’s Arch by the Mad King himself, made Tyria a great place to trick and treat.

The Mad King’s Realm also had such an insanely difficult Clocktower jumping puzzle that developer Josh Foreman apologized for it. (I saw only one person complete it during the couple of hours I tried—and failed—at it. One player claimed they’d been at it for three days.) With any luck, “The Lost Shores” will keep frustration down to a minimum.

For me, the really noteworthy feature of the Halloween event was the two new PvP modes.

I mentioned back in my original review of GW2′s PvP that although Structured PvP was enjoyable, it lacked variety—only four maps, and all of them capture-point based. So imagine my surprise and delight to see ArenaNet offer up not one but two new PvP styles:

– One arena, Reaper’s Rumble, had players protect their mausoleums while destroying their opponents’. Each side could grow an army of skeletons by retrieving and planting pumpkins in their mausoleums. Farming as PvP combat? That’s different.

– The other arena, Lunatic Inquisition, had two types of player: villagers and ghostly courtiers. If you were a courtier, the object of the game was to kill villagers and convert them to your side. The object for the villagers was, in proper horror-movie style, to try to stay alive for the night (or thirteen minutes in game time). As a nice touch, if you were the last villager alive when the game ended, you earned a special glory bonus.

(This leads me to wonder if these events are ArenaNet’s a clever way to beta-test new PvP modes. We’ll have to wait and see if a version of them appears in the upcoming event…or in the game for realsies.)

Once the Halloween event concluded, all the parts of the Mad King’s realm vanished, along with the doors leading to it (and sadly, the awesome PvP modes). “Lost Shores,” on the other hand, will effect a more permanent change. ArenaNet says, “There will be plenty of content available to enjoy that will remain permanently in the world as a result of the outcome of this event on Sunday.”

I’m speculating here, but this could mean that a currently and conspicuously inaccessible area of the map—such as part of the Sea of Sorrows that lies between Caledon Forrest and the Bloodtide Coast, mentioned in ArenaNet’s forum post—will permanently unlock and become a new zone for players. (“The Found Shores”?)

In addition to the November event, there will be another event in December—at least, according to the top of “The Lost Shores” page.

Note: ArenaNet says that players who miss the November 16 launch will be able to participate in all events later, except for one:

“The event will culminate in a big Finale on Sunday November 18, make sure you will not miss it. This will be a onetime only event chain that will run multiple hours, and it will kick off at noon PST (20:00 GMT). Again, this will only run once, so make sure you will be there!”

Considering they’re not getting a monthly subscription fees from GW2, these one-off events speak well of ArenaNet’s commitment to their players. I’m looking forward to seeing what they have in store for us next week.