What If 60s-Era Robin Crashed a ‘Dark Knight Rises’ Smackdown? 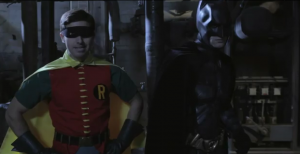 Above Average Network. Image from video.

1960s television comedy Batman was a more innocent show than the rebooted Dark Knight series, which takes  the phrase “dark and gritty” and stomps on it until it screams. In fact, the portrayals of the characters are so different that putting them in the same room would be ridiculous. Even hilarious. So AboveAverageNetwork decided to do just that.

In this video, below, we see what happens when 1960s Robin, played winningly in the show by Burt Ward, meets the gravelly voiced Batman and his opponent, the mumble-mouthed Bane. As for Robin’s voice…well, let’s just say it’s distracting.