What ‘Star Wars: The Old Republic’ Gamescom Presentation Was Missing 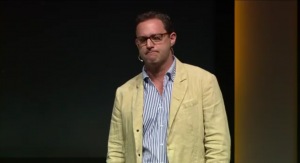 EA may have been voted the worst company in America, but they certainly know how to put on a good show. At Gamescom yesterday, EA presented their upcoming lineup of games. The games were a good blend of genres (FPS’, driving games, sports games, simulation games), and they all looked entertaining and engaging…with one notable exception.

Compared to the rest of the EA lineup (with games such as Army of Two: Devil’s Cartel and Need for Speed: Most Wanted) Star Wars: The Old Republic (SW:TOR) came across as lackluster.

How lackluster? Although every other speaker mentioned attention-grabbing phrases such as “heart-pounding rocket ride” (Dead Space 3) and “revolutionary new features” (NHL13), one of the first things that Matthew Bromberg, general manager of BioWare Austin, announced was “virtual currency.”

These Cartel Coins, he said, can be “used to make purchases from our in-game store in the months ahead.”

He continued. “As a company, we believe in free to play…. Today’s players want flexibility and control to play as much or as little as they want, and to pay only for those features that are meaningful to them. Adding a free-to-play option delivers that.”

Only after the currency announcement, Bromberg went on to discuss gameplay and content updates, something onlookers might have expected to be item 1, especially considering that as people following SW:TOR know, players leveled up quicker than BioWare had anticipated, leaving them without new content.

“We’re also committed to providing more frequent content updates, beginning right away. Next month we’re releasing a new high-level operation, Terror from Beyond, which takes place on the planet of Dolsavis. Soon thereafter we’ll release a series of level fifty+ space missions. And for PVP fans, a new warzone called Ancient Hypergate is on the way.” (This was first announced on the SW:TOR blog on July 31.)

Bromberg said, “Today we’re kicking off a new dynamic in-game event, called the Grand Acquisition, an adventure that challenges players to travel the galaxy in a race against time with an unexpected twist at the end. Here’s a taste of the Grand Acquisition live in the game now…”

…except that it wasn’t live. Although we get a bit of gameplay, if you see the YouTube replay of EA’s Gamescom press conference, starting 53:29, you’ll notice that it’s a commercial–and far cry from the live gameplay of Crysis 3, starting 45:55.

[UPDATED: According to John Reseburg, senior director of corporate communications of EA, “‘Live’ refers to the fact that the content is now ‘live’ in the game, not ‘live on stage.’ And yes, we do show a trailer to give a sense of the new content in the game – that’s pretty standard practice, especially for massively multiplayer online games, where having 1-2 people on the stage with a controller really doesn’t give you a sense of the experience.]

Before he left, Bromberg presented “a sneak peak to celebrate the next chapter in our history,” another commercial.

But what a commercial: It’s one that makes you sit up and pay attention. It’s the kind of commercial that made me think, “Wow, that’s what I want in a Star Wars game.” That starts at 54:20.