What Would Star Wars Cost in 2012 Dollars? 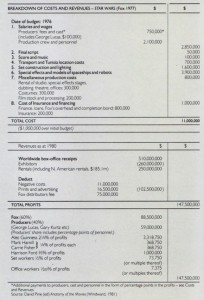 Movie budgets have been skyrocketing to absurd rates ever since Kevin Costner spent $175 million in 1995 dollars to make Waterworld. But you know which movie’s budget wasn’t absurd? Star Wars.

As we all know, George Lucas spent $11 million to make his epic science fantasy film, known to geeks like me as Star Wars Episode IV: A New Hope. Adjusted for 2012 dollars, that’s comes to a mere $40 million. (Click the image, above, to expand.)

According to an article on Geek.com,

Of course, this number doesn’t come close to Lucas’ total wealth. He earned 107th place on the Forbes 400 mostly from the sales of Star Wars-based merchandise.