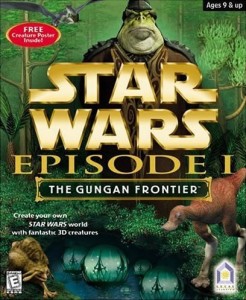 According to Fusible, Lucasfilm registered multiple domain names on the same day that EA announced its exclusive deal to produce Star Wars videogames, and the timing leads many of us to believe that these domain names are future game titles. It’s good to think ahead, because this gives us time to craft the perfect excuse for why we’ll be out of the office for each launch day. But EA will need time too, to resolve a very real problem that one upcoming game will have.

Some of you may recognize Gungan Frontier, a Lucas Learning game released in 1999, one week after Star Wars: The Phantom Menace. It was a simple RTS game, enjoyed by those who played it. In it, the Gungans colonize Ohma-D’un, a moon of Naboo. You help the Gungans to develop their ecosystem, which teaches young players about nature’s checks and balances.

But the story of Ohma-D’un didn’t end when you shut off your computer (as with many RTS’s, Gungan Frontier had no winning condition). It continued with the rest of the Clone Wars saga…

…And most of the Ohma-D’un colony was destroyed by poison gas. In the Dark Horse comic book, Star Wars: Republic, Asajj Ventress released the poison on Ohma-D’un to test its efficacy.

You know that gimer bush you lovingly planted? The gullipuds that innocently frolicked while nibbling the vegetation? You can bet they’re all dead too.

I wonder if Gungan Frontiers 2, 3, and 4 will address this particularly horrific scenario. EA can choose to either ignore it or even have Disney expunge this fact from Star Wars lore. But I’d like to see EA, to paraphrase Padme in Star Wars: Attack of the Clones, follow these thoughts through to conclusion.

With the idea that there could be perhaps one thousand survivors of the Ohma-D’un massacre, here’s how I would think it will play out:

Instead of a peaceful reintroduction to the oceans, the Ohma-D’unians retake all of Naboo for themselves. Help the descendants of Jar-Jar Binks, ears flapping as they run, storm the Queen’s palace of Naboo.

I envision this as a first-person shooter.

This would be a no-win scenario RTS.

The survivors of Ohma-D’un return peacefully to Naboo, only these Gungans are suffering from post-traumatic stress disorder. Navigate your Gungan avatar around the health-care system of Naboo as she rebuilds her life.

This has to be Quantic Dream’s next game after Beyond: Two Souls. It has to be.