When Biospheres Attack: The Science Of ‘After Earth’ 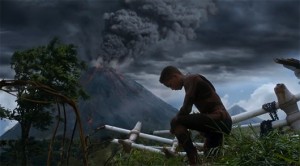 In the year 2071, planet Earth breaks up with humanity. Not only that, she wants us to leave the house. That’s the premise of After Earth, which begins one thousand years after we’ve packed our bags and hightailed it off the planet. And during those thousand years Earth has evolved just fine without us. So when Cypher Raige (Will Smith) and his son Kitai (played by real-life son Jaden Smith) are forced to return, our ex will do anything to make them leave. And that’s where the movie fun begins.

But it’s the science behind the science fiction that’s of interest to me. In a phone interview, screenwriter Gary Whitta told me, “We started from the premise that this is less of an extinction and more of an eviction. Earth basically decides to get rid of us…through changes in atmospheric conditions.”

“We eventually reach a tipping point where Earth has just had enough of the damage humankind is doing to it: kind of a timely message here about global warming and the toxification of the planet’s atmosphere.”

What Whitta has described is one form of the Gaia hypothesis, a loose, non-codified set of theories that pertain to the environment. One point on the Gaia spectrum (though the weakest, scientifically) holds that Earth is its own organism, one that can self-regulate. Another point, scientifically stronger if less exciting, suggests organic life interacts with a non-organic environment, which according to the University of Michigan, “influences the evolution of the biota by Darwinian process.” (More simply put, and something scientists can agree upon: many systems—biological, chemical, and geological—are interconnected.)

Whitta’s job is to tell an entertaining story, so After Earth is looking at the “When Biospheres Attack” end of the spectrum. When Raige and Son find themselves on a world that is no longer their own and currently belongs to (among others) amped-up orangutan-like creatures, you can see that Whitta has created a feral world first and a scientific rationale second.

Whitta said, “It’s not a two-hour science lesson, but we certainly do hope that that kids and families that see the movie might be inspired about the ecological themes of the film.”

Other science fiction films have made environmental messages palatable to the popcorn-eating public, such as Silent Running (1972), WALL-E (2008), The Road (2009), and most notably Avatar (2009), which features a planet whose many organisms are linked together.

However, none of these films took the next step as Columbia/Sony producers did: They created lesson plans for high-school students based on the scientific premises underlying After Earth.

The lesson plan is an eye-opening read. Global warming gets a mention, as does the increased amount of carbon dioxide in our atmosphere and in our oceans. It’s an extremely detailed look at a topic that, irrespective of your point of view, deserves to be taught.

New York City high school science teacher, Joel Jackel, who read the lesson plans, said, “I’d use parts of the movie to drive home specific points about climate change. Perhaps more valuable would be to show students how the scientific data is gathered and analyzed. I believe many people doubt the cause of climate change, because they do not understand how the data has been obtained and interpreted.”

Whitta told me, “If the movie, while still using exaggerated hyperbolic version of scientific principals to make the point and [children] become more engaged in the real science behind the film, then we’ve done something worthwhile.”

Of course, if he’s created a good movie with as much thought in the action that went into the science, After Earth will be even more worthwhile.

Directed by M. Night Shyamalan–whose most successful movie The Sixth Sense (1999) earned $672 million and whose more recent project, The Last Airbender earned $319 million–After Earth was given a budget of $130 million. It’s projected to earn $34 million on its opening weekend.

Interestingly, After Earth is not appearing in 3-D. This is notable considering the criticism leveled at The Last Airbender concerning its 3-D post-production conversion.