Why Games Like ‘Beyond: Two Souls’ Are Both Good and Bad for Actors 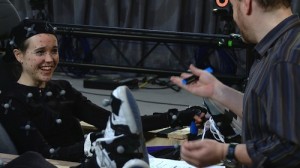 At the Tribeca Film Festival on Saturday, April 27, David Cage, CEO of Quantic Dream, displayed a half hour’s worth of footage from the upcoming videogame, Beyond: Two Souls (B2S). If you’ve experienced the cinematic style of QD’s previous game, Heavy Rain, you’d know why B2S is a natural fit for a film festival: Quantic Dream’s games tell stories, and the half hour of B2S tells the story of a girl whose invisible friend is actually a powerful and dangerous entity.

After the audience saw the extended clip, we were treated to a Q&A session with Cage and actors Ellen Page, Kadeem Hardison, and Eric Winter, who explained the process of making this extremely high-end choose-your-own adventure story. Although Cage’s description should entice every serious actor to add videogames like B2S to acting bucket lists (this, and appearing in a superhero movie), Page and Hardison explained that this work presents its own challenges.

Quantic Dream filmed B2S on a sparse set with nothing but behind-the-scenes equipment and the most rudimentary of props; animators created the rest of the environment later. Cage said it was “funny” to see the actors’ reactions to the set, which were unanimous:

“On the first day they were really lost, because the set is empty. The only thing they can see is the motion capture suit. They asked, ‘Where’s the camera?’ There is no camera. There are cameras 360 degrees around you, so you don’t have to look at something in particular. ‘What about the lighting?’ There’s no lighting.”

Although the actors were lost at sea on the first day, Cage explained it didn’t take long for them to find their legs.

“On the second day, they all had the same reaction: ‘What a minute. That means that I’m free. No one is asking me to look in this direction, to be careful with the light… We can just act with other actors and focus on the script and my role.’ So they realized how free they are.”

This freedom has its own particular challenges, as actress Page explained.  Although she called it “a great exercise,” she noted, “Everyday you’re doing thirty-plus pages.”

For the most part, studios film anywhere from one to five pages a day, depending on the complexities of the shot. With absolutely no breaking down and resetting of lighting and sound equipment, motion-capture shoots can run at a blazing speed. Actors on a motion-capture set therefore must memorize a whole TV episode’s worth of dialog…every day. “It’s nonstop,” she said.

Also, “You can’t touch your face,” Page said, lest you disturb the ninety markers that dot the actors’ faces.

Actor Hardison agreed. “They have to stick each one in your face…[and] sometimes one will come off, and they got to stop the world, search the floor, get that one, and stick it back before we can go on.”

Despite these minor problems, Cage prefers the motion capture technology used in B2S rather than the type he used for Heavy Rain. The actors for Heavy Rain recorded their voices individually in a soundbooth. Later, the studio filmed the body animations while playing the audio at the same time, to synchronize the two. In the process, Cage said, “you lost all the body expressions. All the subtlety was lost.”

But for B2S, face, body, and voicework of multiple actors were all recorded at the same time, giving the audience, despite its high-tech process, a more natural presentation.

From what I saw from the articulated yet impassioned performances, I would say that B2S isn’t just a game on every gamers must-play list. It’s also a game that actors should pay attention to.

Unconvinced? See for yourselves in the YouTube clip, below.