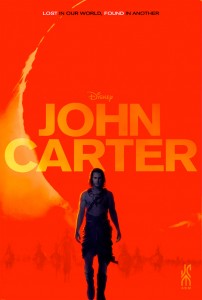 Fact: I’m a fan of the 1917 novel, A Princess of Mars, the book that serves as the inspiration for the upcoming Disney movie, John Carter. I love Edgar Rice Burroughs’ prose and his world-building of Mars. But I’m less than happy with the negative press surrounding John Carter, especially because some of it has been deserved. And if the movie flops, Disney will have no one but itself to blame.

According to The Daily Beast, a former Disney executive said John Carter has “boiled down to something no one wants to see.”

How could this be? It was based on a terrific book. Our hero, John Carter, comes to Mars (a.k.a. Barsoom), and helps save the planet in distress, thanks to his human abilities turned superhuman in the Martian gravity. It has adventure. It has romance. And to make Disney’s accountants happy, the novel happens to be in the public domain. (You can even read it for yourself, here.)

So what’s wrong with John Carter that has everyone on the Internet claiming the movie is a flop before its March 9, 2012, release date?

It seems that this crisis of confidence Disney has had with John Carter has absolutely nothing to do with the film itself. It’s likely about internal politics. The Daily Beast writes:

If you believe much of the Hollywood trade-paper coverage, [the problem] has been [Disney Chairman Rich] Ross’s seemingly reckless restructuring of the studio’s top brass. Upon arrival, he streamlined a number of divisions and replaced a dozen or so senior studio executives with new appointments from outside the movie world.

Can this be part of a whisper campaign to oust an unpopular leader in the House of Mouse? Considering that no one outside the studio has actually seen the movie, the Internet-wide discontent has had to have come from within.

There are other problems with John Carter besides accusations of director Andrew Stanton going way, way over budget. Disney may be loathe to confidently promote a movie about Mars after Mars Needs Moms flopped at the box office. And then there’s the other pulp novel series-turned-movie, Conan the Barbarian, which also earned Lionsgate a dissapointing 50% of what it spent. Spending money on a new campaign to revert public opinion now might seem to Disney like throwing even more money away. But why wouldn’t Disney wholeheartedly promote a good movie it has on its gloved hands?

Sadly, there is evidence that this movie isn’t as good as I could hope for. The trailers have displayed Taylor Kitcsh as a one-note actor (which is not true of his other work in Friday Night Lights), and the dialog could be better.

But worst of all, John Carter’s marketing campaign has alienated its fan base. Yes, it has what my geeky pals and I are looking for (aliens and an alien landscape, superheroic derring-dos), the movie has committed the sin of omission.

The original title was John Carter of Mars, a move that signals to me and mine that this might be the kind of movie we’re looking for. And it’s not just the title. When I pointed out to a friend that a poster of Kitsch standing in front of a red background was for a science-fiction movie, she said, “How can you tell?”

Obviously, Disney’s marketers cut out the “of Mars” to appeal to a broader fan base? But who does the movie appeal to now? Not average movie-goers, who have no idea who John Carter is, and certainly not science fiction fans.

So the negative press surrounding John Carter comes both from within and from the fans that this movie was made for.