Why Trekkers Should Play ‘Star Trek’ the Video Game 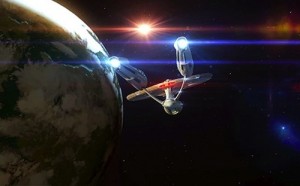 Lens flare (without a lens)

James Tiberius Kirk. Three to beam up.  He’s dead, Jim. If any of these words elicit a geeky thrill, then you’ll also know that many past Star Trek videogames…do not. The MMO Star Trek Online notwithstanding, Star Trek videogames have not earned the love that Star Wars fans gave Knights of the Old Republic 1 and 2 and The Force Unleashed. This might change with the release of the upcoming game Star Trek. Fans who grok Spock might want to give Star Trek a try.

According to Brian Miller, senior VP and games producer of Paramount Pictures, Trekkers would like Star Trek because, “It’s a canon story. You’re getting an untold adventure that you can’t get anywhere else. We wanted to make a game that could be a movie on its own.”

Miller said that the crew of game developers, the London, Ontario-based Digital Extremes (DE), worked closely with Paramount to create “the authentic version of Star Trek and that meant it had to look right.” The bridge is perfectly recreated for the game, and other assets you’ve seen in the rebooted Star Trek will make an appearance too. “We have access to everything that was made in the film, because we made the film,” he said matter-of-factly.

Paramount and DE also had access to the stars of Trek–all of whom make a vocal appearance. But they also bring knowledge of their characters with them. Miller said, “When we were doing recording sessions, Zach[ary Quinto, who plays Spock] said, ‘Change these lines, because Spock would never say that.’ Simon Pegg [who played Scotty] asked if he could improv a little bit. And if Simon asks that, the answer is always yes.”

Paramount and DE also brought Star Trek composer Michael Giacchino back on board the Enterprise. Giacchino wrote two hours of original music for the game, which was played by a 100-piece live orchestra.

Sounds great. But is it a good game? I’ll write more about my playthrough soon. Until then, I can say it’s a game with both local and online co-op (and you can choose to be either Kirk or Spock). The Gorn, from the famed original series episode “Arena,” are the enemies here. But we can expect to see more than the hissing, rock-tossing reptiles of the 1967 episode: There are fifteen different Gorn species, each with their own abilities (and hopefully weaknesses).

As with the Star Trek episodes, movies, and books, the game will have its share of fights, but player characters Kirk and Spock will also be exploring strange new worlds. Miller said, “Star Trek is about discovery, exploration, and learning. You use your tricorder to scan enemies, to learn about flora and fauna. Using the tricorder rewards players with experience, which you can use to upgrade your tricorder and weapons.”

The game will include a few Easter eggs that flash back to the original series…including the fuzzy Easter-egg shaped Tribbles.

Will our heroes die at the scaly hands of the Gorn, or will they live long and prosper? And will Star Trek be the game that will send Trekkers running to their PCs/consoles? We’ll know more on April 23rd when the game will be beamed to the PC, PS3, and Xbox.