Will Michael Bay Direct the 4th Transformers Movie? We Hope Not 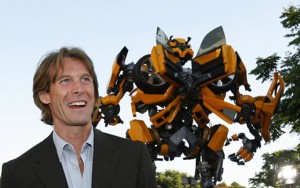 Paramount Pictures has planned a fourth Transformers movie for a release date of Summer 2014. If Paramount has its way, director Michael Bay will return with his particular brand of explosive magic. But producer Lorenzo di Bonaventura is unsure if big bad Bay will be sitting in the Transformers 4 director’s chair.

When asked where Bay stood on Transformers 4, Bonaventura told ComingSoon,

“Michael had a debate because he sort of felt at first that he’d done three. Michael and I are both the same in that we always like to top ourselves. That doesn’t necessarily mean bigger. It can be bigger in places, it just means different, but we’re going to push really hard as fresh and new as we can be.”

Bay, who is currently filming Pain and Gain, about steroid-abusing bodybuilders who turn to crime, has not commented on the latest installment of Autobots vs. Decepticons. (Back in October Bay had denied that he was in talks, but that’s practically the Cambrian period in Hollywood years.)

But that might not a good idea. Last year, Bay admitted that the series’ second installment, Transformers: Revenge of the Fallen, was “crap,” blaming the Writers Guild strike of 2007-2008. Yet he publicized and promoted the movie, knowing it was a dud. The other two films are also less than critically acclaimed. But somehow the three movies earned $700 million, $830 million, and $1.1 billion, respectively.

If the Transformers’ many fans who were appalled by their favorite cartoon turned cinematic spectacle have their way, Michael Bay won’t have a hand in Transformers 4 at all.