Will ‘Twilight’ and ‘True Blood’ Replace Religion in Teenagers? 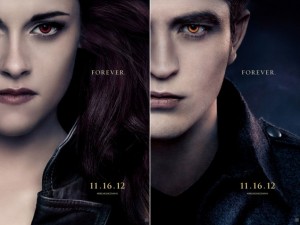 What is the nature of good and evil? Do I have a destiny? Do these eyes make me look fat?

Young people become have increasingly irreligious in countries such as Denmark, yet they still ponder the big questions: Is there a heaven? What happens to us when we die? Will we turn into vampires? Well, perhaps not that last question, but according to Line Nybro Petersen of the University of Copenhagen’s film and media studies department, supernatural-themed television shows and movies, like Twilight, are helping teenagers explore questions about life and death—and some of them find the answers they’re looking for.

According to an article in LiveScience, “’Twilight’ Stands In For Religion in Some Teens,” Petersen interviewed teens who watched television shows like Supernatural, True Blood, and The Ghost Whisperer, as well as films series such as Twilight, Lord of the Rings, and Harry Potter.

“You don’t have any clear answer to what happens [when you die], so perhaps when you read different things and watch different movies, then it gives you something,” Katja, a young ‘Twilight’ fan, or “fanpire,” as these teens called themselves, told Petersen. “Perhaps not a clear answer, but more like, ‘Oh, it happens like this,’ and then you can choose to believe it.”

Katja may not choose to believe that vampires sparkle or that demons walk the Earth, but thanks to Twilight, she may consider that there is everlasting life and everlasting love.

In addition, Petersen noted the appearance of ritualized behaviors in deeply involved fans attending these movies or watching these shows:

“I have observed the Twilight fans at premieres and noted how they through a number of rituals show or perform their affiliation with the series. They cry, shriek, and sing – and this performance is central to their sense of belonging to something larger than themselves.”

And LiveScience wrote, “The communal experiences of hardcore fans of the series can even echo religious communities.”

Will television shows such as Charmed replace religion? As an atheist, I adhere to the concept that if something replaces religion, it becomes religion and is therefore not rational…no matter how highly entertaining Buffy the Vampire Slayer is.

But the University of Copenhagen is currently studying “mediatization,” “the process through which core elements of a social or cultural activity become influenced by and dependent on the media.” This may include a deeper look at religion and the supernatural-based media.

Research will be completed in 2015. By then we should know if Geek Day (which happens to be today, May 25) will be included in the roster of religious-based national holidays, like Christmas and Easter. At least in Denmark.

(Thanks to Esther Schindler.)