Winter Has Come: A Recap of the New York City ‘Game of Thrones’ Event 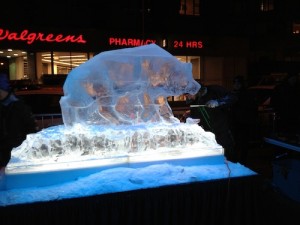 For those who missed the event, to promote the DVD/Blu-Ray release of season 2, devout fans of the world of Westeros lined up in 34F/1C weather. It was an imaginative affair, full of sounds, sights, and tastes. We were kept amused with a carving of a direwolf ice sculpture, as well as a concert performance of music from the television series: Jason Yang, who received over four million YouTube views of his one-man, thirteen-violin version of the theme song, led a nine-piece orchestra, who performed admirably despite the cold and passing traffic. A soloist also sang “The Rains of Castamere.”

But to me, the highlight of the event was the food, which came directly from the Game of Thrones-inspired cookbook A Feast of Ice and Fire…and from the hands of the authors, fan food bloggers and Sariann Lehrer and Chelsea Monroe-Cassel (no relation to Jory Cassel)

Inside, where it was mercifully warmer, HBO had displayed Jon Snow’s black clothes–not a replica, but the costume that really should be in a warehouse waiting for season four’s film shoot–as well as his sword, Longclaw. Fans waited on line to be recorded as they took the oath of the Night’s Watch. Some of you know it by heart, but just in case you’re more of a Tyrion fan than a fan of the Wall:

Night gathers, and now my watch begins. It shall not end until my death. I shall take no wife, hold no lands, father no children. I shall wear no crowns and win no glory. I shall live and die at my post. I am the sword in the darkness. I am the watcher on the walls. I am the fire that burns against the cold, the light that brings the dawn, the horn that wakes the sleepers, the shield that guards the realms of men. I pledge my life and honor to the Night’s Watch, for this night and all nights to come.