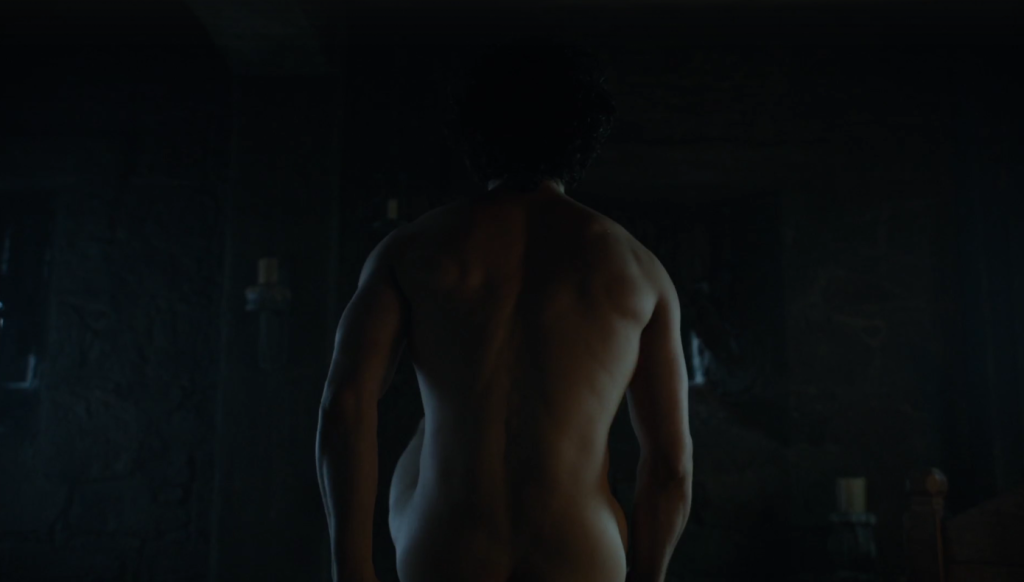 The HBO TV series Game of Thrones has almost completely veered away from what we know in George R.R. Martin’s series of novels, A Song of Ice and Fire. Season 6 has been a giddy experience for those of us who had been inoculated to spoilers by the books…

…the books that haven’t yet been completed. And probably won’t for several more years.

This episode “Oathbreaker” has made us even more giddy by delivering what looks like serious spoilers for novels that haven’t even been written. Some of us have been waiting for these details since the first novel, A Game of Thrones, was first released back in 1996.

RICKON STARK AND OSHA THE WILDLING

In the second season of Game of Thrones, Theon (Turncoat) Greyjoy sacked Winterfell Castle, and the two heirs, Bran and Rickon Stark, fled. In the third season episode, “The Rains of Castamere,” Bran said it would be safer if the two brothers were separated. While Bran went north of the Wall, Osha the Wildling took Rickon to what we had hoped was the safety of their allies, House Umber.

But we learned yet again that safety in Westeros is as mythical as a yeti riding a unicorn.

In this episode, the current lord of the Last Hearth, Smalljon Umber, brought Rickon Stark and his protector Osha to the new lord of Winterfell, Ramsay Bolton.

There is absolutely nothing that can go wrong here.

Fans of the book haven’t seen Rickon since right after the sack of Winterfell. But we knew that according to rumor, Rickon was in Skagos—a large island where the inhabitants are practically barbarians.

So did Ramsay know this boy was, in fact, Rickon? Because Umber also brought Ramsey the head of his direwolf, Shaggydog. (Shaggydog! Noooo! Benioff and Weiss, you’re as cruel as George R.R. Martin!) Although it sucks to see Rickon and Osha in Ramsay’s clutches, at least we know where they are.

THE TOWER OF JOY (Potential spoilers)

Bran Stark is studying his green-seeing mojo north of the Wall with the Three-Eyed Raven. In this episode, he looks into the past and sees a story that readers have wanted to know about since the book first appeared—the Tower of Joy.

Robert Baratheon declared war when Prince Rhaegar Targaryen kidnapped his fiance, Ned Stark’s sister Lyanna, raped her, and held her hostage in the Tower of Joy… Or did he? (There are clues in the first book in the series that hint Lyanna went with Rhaegar willingly and that she loved him.)

But this theory leads to the resulting theory that Jon Snow isn’t Ned Stark’s bastard but the child of Lyanna and Rhaegar. (See video, above.)

And if this is all true, this means that Jon Snow is a Targaryen and a potential heir to the Seven Kingdoms.

Which leads us to:

YOU KNOW SOMETHING, JON SNOW

Jon Snow is alive—praise R’hllor, the Lord of Light—and unsteady on his feet. His first act? Getting naked in front of the camera. For his second act, Jon hanged the men who killed him at the end of season 5. (Weirdly, he didn’t kill him himself with a sword, which is the law of the lords of Winterfell—“the man who passes the sentence should wield the sword.” Perhaps, as with Buffy in Buffy the Vampire Slayer season 6, when she returned to life, she came back “different.”)

Finally, Jon handed his cloak to his second-in-command and said, “My watch has ended.”

That’s it. Jon had died, so his watch has ended. This means now Jon Snow is alive and well and available to marry his niece Daenerys.