4 diet programs for the Mac 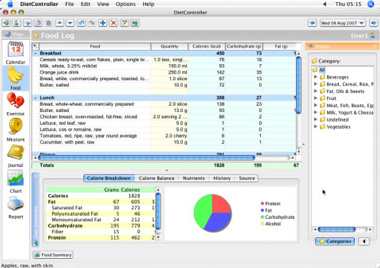 If you’re like me and millions of other Americans, you have a few extra pounds you’d like to shed. If you’re also like me, you have a Macintosh. I thought, why not combine the two and take the cutting-edge power of computer science and apply it to my ever-expanding flesh? Ten pounds need trimming. Time to get to work.

Over the course of several days, I took a look at several programs designed to give technological support to this minor body modification. All of them work in very much the same way: input the food you’re eating, and it reveals the calorie count and ratio of carbs, fat, and protein. You can track your progress daily, weekly, and monthly.

I discovered that no software beats the specialized, one-on-one feedback of a nutritionist or the support of a group like Weight Watchers. But if you want to go it alone, and you’re willing to do the work, some programs are more helpful than others.

And when it comes to choosing brussel sprouts over chocolate-covered cherries, I need all the help I can get.

Note: As with anything health-related, check with your doctor to see if using nutrition software is right for you. I started using Diet Controller by typing in my height, weight, and age, but I didn’t end there: With categories for food intake, exercise, body measurements (biceps, calves, and the like), the only thing Diet Controller doesn’t control is my emotional state. Oh yes, it does: there’s a Journal section, which presumably allows me to vent after typing in all those measurements.

With a few clicks of a button, Diet Controller tells me how many calories I need to eliminate in order to reach a target weight. (The answer: too many.)

Although the database is filled with brands like “Kraft Post Toasties,” it comes up short with health-food store fare that I favor, like agave, a honey-like sweetener. For as many foods there are, some groups are surprisingly limited: “peas” yields a plethora of potential choices, like “peas, mature seeds, sprouted, raw.” But none of these take variety into account, like snow peas or black-eyed peas.

Diet Controller also has a lot of real-world measurements: coconut meat is broken down into measurements that include “a piece” (2” x 2” x ½”).

Diet Controller was satisfying to use. But with daily measurements to take, it’s not exactly foolproof. But if you can write your food intake and measurements down, you’re on your way to the discipline that any diet requires.

Apple?
1 medium = 72 calories, which you can work off by climbing stairs for almost nine minutes. Nutritionist is an odd program. Based on Eastern nutrition rather than Western, meals are broken down into unusual categories. In addition to fat, protein, and carbs, Nutritionist also displays, for example, “acid,” “yin/yang,” “flavors” and “illness.”

With trial and error, I scrolled through a circular list and looked at different categories. But even though I see that one food is higher in “yin,” I still don’t understand what that means to my diet. Although some people may have a use for it, I can’t imagine using many of Nutritionist’s salient features, such as digestion time and how much acid is generated.

As a result, the user guide was not an option: it was an imperative. Its unintuitive interface had me struggling at the get-go.

However, when creating my own meal to input into the meals window, I found an excellent database of foods (at least it contains most of the foods I eat every day). Type in the first two letters of the food you’re trying to add (“to” for “tofu”) to make scrolling through choices quicker.

Nutritionist comes with many preloaded meals, some of which looked tasty, but the window that displays the recipes are rather small. The user guide explains that each meal has a value (from -7 to 7), and the higher the value, the healthier the meal. I’m struggling to understand why a scale would list negative numbers.

And what to do with the information? Nutritionist sets no goals, offers no instructions. Also, I had to add the age of my food, presumably to consider its freshness, but just how old is my chocolate bar, really? I truly have no idea.

Worst of all, my trial lasted only an hour. I decided it wasn’t worth anybody’s time to request a longer trial period.

Nutritionist is more of an oddity than a fully-featured nutrition program. I started PDT by creating a profile, including a password, so no one else knows that I weigh more than I did four days ago, despite working with all of these other programs.

I created a weekly target (1.5 pounds a week sounds about right) and honestly assessed that my activity level is between sedentary and moderate. The calorie restriction the program recommended was too harsh for me, so I readjusted to 1 pound. I’m encouraged by the overall ease of use: adjusting my profile was a snap.

Typing in the foods I eat revealed a very good–although not exhaustive–list. Agave is there (hurray!), as is goat milk. Only a few peas were differentiated from the pack, like pigeon peas and chickpeas. And PDT has the best exercise list of all the diet programs I looked at.

But where PDT threw me, and threw me hard, was over the measurements; here, it’s painfully obvious that PDT is based in the United Kingdom. There were no measurements for teaspoons or tablespoons—but “one serving” equals 21 grams, which I deciphered to mean “one teaspoon.” It hurts my brain to think about doing the math on a tablespoon. One other concern: separating foods into different meals was not intuitive, but once I found the correct field, it’s now as simple as the rest of the program.

However, its flexibility works well even in measurements. I can easily increase my serving size (for those days when cup of yogurt turns into a cup and a few extra ounces), as well as easily update the product list. Goodbye, plain yogurt. Hello, yummy vanilla. Calories is the simplest of the dieting software programs, and for those who are wary about using these kind of programs, it’s the most painless. For those who want a full-fledged dieting program, Calories is incomplete: it eschews exercise and measurements of any kind. It all depends on what you’re looking for.

Simplicity really is strength of this program. I selected the meal I’m eating from the toolbar and searched for the food. I click the correct one. Voila. My calories are counted.

Calories has a wide variety of foods to choose from (like, bizarrely, “human milk”).
It also had fewer pre-packaged foods than other programs. Searching on the word “peas” brings up a good selection, such as split peas and blackeyed peas. It didn’t recognize my agave sweetener.

I inputted a new food but found I had difficulty inputting the calorie count. I went to the Help section…only to discover it doesn’t exist. I found a quick tutorial, but it didn’t solve my problem.

For only $19, Calories is a good way to watch your weight, but it may be too simple for those who are looking for a more comprehensive approach to dieting.

– Calories is a dead-simple program, but it doesn’t consider your exercise.

– Nutritionist is not recommended. Even our third eye couldn’t figure this one out.