Lost Charles Darwin fossils discovered in a drawer after 165 years 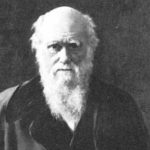 You find all sorts of strange things in drawers. Broken pencils. Bits of string. Charles Darwin’s slides. An even more broken pencil sharpener. Wait … what was that third thing?

That was likely the thought process of Dr. Howard Falcon-Lang, a palaeontologist at Royal Holloway, University of London, while he was rummaging through drawers at the British Geological Survey (BGS) and discovered slides labeled “C. Darwin Esq.”

According to Planet Earth:

‘This turned out to be a piece of fossil wood collected by Darwin during his famous voyage on the Beagle in 1834,’ says Falcon-Lang, ‘the expedition on which Darwin first began to develop his theory of evolution.’

Darwin, who formulated the theory of evolution, is one of the most famous scientists of all time. In fact, Darwin isn’t just a Science Hero of geekdom: the Brits like him so much they put him on their money.So how did these slides fall into the obscurity of a drawer at the BGS with the label “unregistered fossil plants” (which might as well have been labeled “Beware of the Leopard”)?

The collection may have slipped into obscurity partly through bad timing; Hooker had set off on an expedition to the Himalayas by the time BGS’s formal ‘specimen register’ was established in 1848. When he got back, in 1851, the collection was being moved to the Museum of Practical Geology in Piccadilly and the opportunity for him to label the fossils had passed. In 1935 the collection moved again, to the Geological Museum in South Kensington.Finally, 50 years later, the fossils returned to BGS and were placed in their storage facility at Keyworth near Nottingham. BGS is home to more than three million fossils, collected and recorded with precision over two centuries. But with each move the significance of Hooker’s uncatalogued collection had gradually passed out of memory.