The 12 most egregious lies in sci-fi 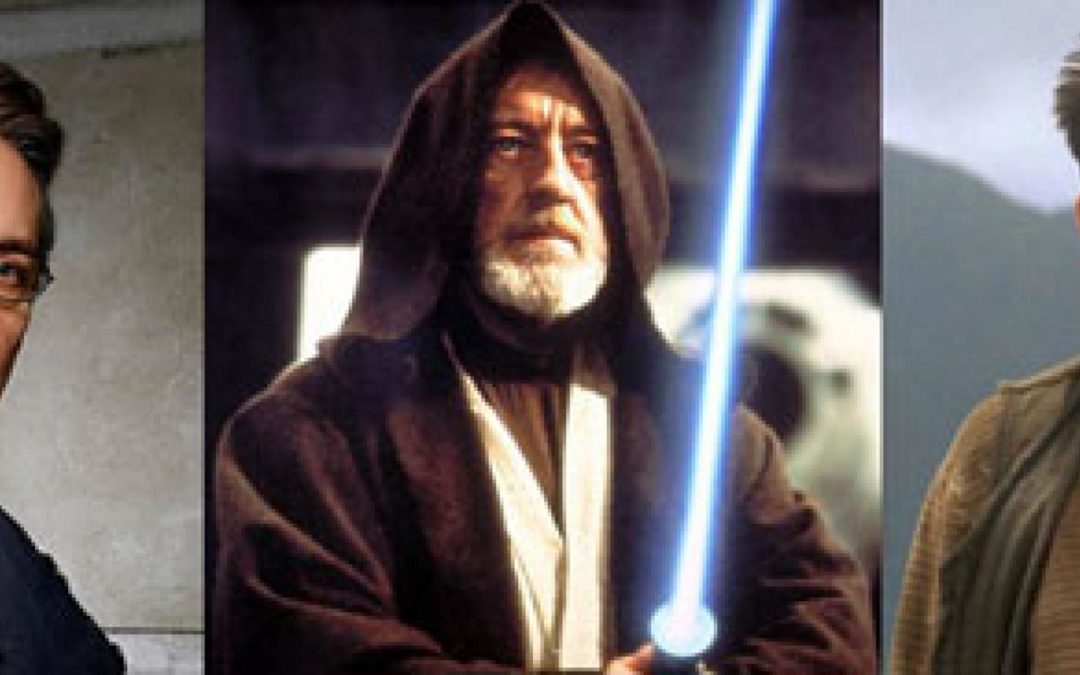 Sci-fi movies and TV are FILLED with lies—and we don’t just mean the ones that Kirk told to get some of those green-skinned women into bed. No, we mean the kind of lies with devastating results and entire worlds at stake. (Sci-fi is epic that way.) Here are some of the biggest whoppers told on-screen, plus a few more subtle ones.

(And shout-out to Eyes for Lies, a blogger who is also a “truth wizard,” which is about as awesome a title as you can get.) The Truth:
“I want total control over the island. And a little freakin’ respect.”

It’s hard to pick a single lie from Lost. From each character with something to hide, to a smoke monster who can morph into any person he wants, facts were hard to come by. But when we think about Lost and lies, we think about Ben Linus.

Ben told so many lies, it’s hard to know which of them had the most impact. He lied about being born on the island (actually, he was born outside of Portland). He told Sawyer that he had implanted a device that would kill him if Sawyer’s heart rate went above 140 (actually, he said it to keep Sawyer from leaving). He told Alex he was her father (actually, he had stolen her from Danielle). He told Juliet he could cure her sister’s cancer (mendacity!).

Our favorite lie: when Jack asks him how he could read, he answered, “My mother taught me.” What seemed like a snide comment disguised the fact that he couldn’t even admit his mother died in childbirth. The Lie:
“I need you, Deck. This is a bad one, the worst yet. I need the old Blade Runner. I need your magic.” – Bryant
“I was quit when I came in here, Bryant. I’m twice as quit now.” – Deckard
“Stop right where you are. You know the score, pal. If you’re not cop, you’re little people.” – Bryant

The Truth:
“I need Deckard. But since he quit, I had his memories copied and implanted them in a skin job—that’s you, by the way. So if you’re not a cop, I’ll retire you right here.”

Why employ real people to do dangerous jobs when you can just copy their memories and implant them in disposable replicants instead? Of course, it works best if the replicant actually thinks they’re the original person. So Bryant lied, and Deckard never learned the truth. He just went on smoking skinjobs and dreaming of unicorns, all the while being a skinjob himself (as confirmed by Ridley Scott).

After Deckard completes his assignment, fellow cop Gaff drops by to tell Deckard, “You’ve done a man’s job,” which is a compliment, considering Gaff knows the secret. How do we know he knows? Gaff leaves Deckard an origami unicorn, a hint that he’s seen Deckard’s dreams. This also gives Deckard the information he needs to piece together the truth for himself. The Truth:
“I’m stalling for time. And I’m totally on to you, liar.”

There’s a rumor that says Vulcans are incapable of lying. That’s not quite true … Vulcans will lie if the situation arises, if it’s logical to do so. (One example includes the episode “A Taste of Armageddon”: “Sir, there’s a multi-legged creature crawling on your shoulder.”)

Which brings us to Star Trek VI: The Undiscovered Country. Spock had been teaching his protégé Valeris the necessity of lying (which he called “an omission” and “an error,” respectively) when it comes to standing up for what you believe in. Valeris learned well: A few scenes later, she lied to him. (“A choice.”)

Spock’s lies may not have been as epic as the others. But it demonstrates how they can come back to bite you. The Lie:
“I know where it is, Earth, the most guarded secret we have.” – Commander Bill Adama

The Truth:
“Pity the title Lost in Space has already been taken.”

Ask anybody whose best friend wears the ugliest shoes on the planet: A lie can be a good social lubricant. But that’s not why Commander Adama told a whopper.

Let’s put this in context … the Cylons have kicked the 12 Colonies off of the 12 Colonies, and now humanity is on the run with little hope of survival. Then Adama addresses the fleet and tells them they’re heading toward the unknown 13th Colony.

The newly sworn-in president Laura Roslin challenges him, and Adama admits that he lied. But he did it for a reason. “It’s not enough to just live. You have to have something to live for. Let it be Earth.” Neo went to the Oracle for confirmation that he was “the One,” the messiah who would save them from their lives as human-powered batteries. This wise woman, who bakes cookies for Buddhist-spouting, spoon-bending children, confirmed Neo’s deepest belief that he was just some guy.

Why did the Oracle lie to him? To keep him on a certain path? To keep his ego in check? We never learned. We also never got to see what should have been a mighty cool confrontation: “Lady, I gotcher One right here.” The Lie:
“The miracle food of high-energy plankton gathered from the oceans of the world!”

Our protagonist, Detective Thorn, learns the truth when following the body of his recently deceased buddy, Sol: “It’s people! Soylent Green is people!”

That plankton doesn’t seem quite so yummy now. The Truth:
“I’m going to make sure that you and Angel never have that bittersweet reunion.”

Buffy the Vampire Slayer was full of brutal truths: Monsters were real. Mothers died. Friends died. Slayers died (some died twice). And even though the characters in Buffy tended to be honest with each other—okay, Xander and Willow cheated on their partners, and Willow hid a magic addiction—one big lie had an even bigger impact.

Willow told Xander to warn Buffy that she was going to attempt to restore Angelus’ soul, so Buffy would need to stall for time. Instead, Xander told Buffy to “kick his ass.” Angelus ceases to exist as Angel is restored, but it’s too late: He’s already awakened that season’s baddie, Acathla, and only blood will stop him. Buffy has to slay not Angelus but her beloved Angel. And all because Xander had a hate-on for Angel.

Note: This scene was referenced almost five years later in the episode “Selfless.” Ash’s biggest lies in Alien were lies of omission; he “forgot” that Ripley was the senior officer and disobeyed her commands, allowing Kane—and the facehugger—on board the ship, Nostromo.

He also forgot to mention that he wasn’t a science officer but instead an agent of an unnamed company (named Weyland-Yutani in the sequel, Aliens). Under Special Order 937, he altered the Nostromo’s flight path so it came into contact with the satellite LV-426.

Ash also suggested that they turn up the ship’s heat, which accelerated its growth process, which means he knew way more about the xenomorph’s physiology than he let on.

And he did it all while pretending to be human. The Lie:
“Renewal!” – A chanting crowd

No one in the vast domed city in Logan’s Run is over 30 years old. That’s the age they get taken to Carousel, to be killed and presumably reborn, which the citizens call “Renewal.”

Sadly, this entire civilization is based on a lie. No one had ever been renewed. Presumably this falsehood was invented to keep the population under control, and we never learn who told it first. However, it was perpetuated by the computers who ordered hunters, aka Sandmen, to kill the ones who tried to run from the inevitable Carousel. The Lie:
“I never wanted the throne. All I ever wanted was to be your equal!” – Loki

The Truth:
“I want to be your superior. I also want the throne. Mwah hah hah.”

In the real world, Loki is a trickster god, and in the Marvel Universe, Loki is the god of lies and mischief. So it doesn’t surprise us that honesty isn’t his best policy. After Odin strips Thor of his power and banishes him to Earth, a confrontation with Loki sends him into a coma called “Odinsleep.” Loki, who was lyin’ when he oughta be truthin’, told Thor that Odin had died. (Also, it was a great opportunity to place Odin’s distress squarely on Thor.)

With this lie, Loki manipulated Thor into staying on Earth so he could rule Asgard himself. Unfortunately for him, his plan backfired when Thor learned a lesson in compassion, and his powers were restored. Loki’s lesson? We don’t know. He escaped Thor’s justice by stealing the body of Erik Selvig, where presumably he’ll be getting up to some new tricks. The Truth:
“Your father fell to the dark side, became Darth Vader, and exterminated almost all of the Jedi. By the way, I was his master and ignored the warnings of my superiors that it was a mistake to train him. Oh, and he built that protocol droid over there. Did I mention I’ve been secretly spying on you for your entire life?”

When Luke Skywalker met Obi-Wan Kenobi, one of the last remaining Jedi, he asked what happened to his father. Obi-Wan lied to him. In reality, Anakin Skywalker was seduced by the Dark Side of the Force, took on the name of Darth Vader and became a Jedi-killing machine (in more than one sense of the word “machine”).

Eventually Luke confronted Obi-Wan. In his defense, he said: “What I told you was true, from a certain point of view. … [M]any of the truths we cling to depend greatly on our own point of view.”

But this isn’t Star Wars‘ only brush with a manipulation of fact.

Earlier (or is it later?), in Star Wars: Attack of the Clones, Count Dooku revealed to a captive Obi-Wan, “What if I told you that the Republic was now under the control of a dark lord of the Sith?” Because these words came from a known villain, they appeared to be a lie, even though Dooku was telling the absolute truth. Obi-Wan refused to believe him.

It’s one of the reasons the Star Wars universe is so compelling. On the surface it’s about good and evil. But when the heroes lie and the villains tell the truth, you realize instantly that the series contains a whole spectrum of gray.