Walking Dead producer dances around the biggest spoiler of season 4 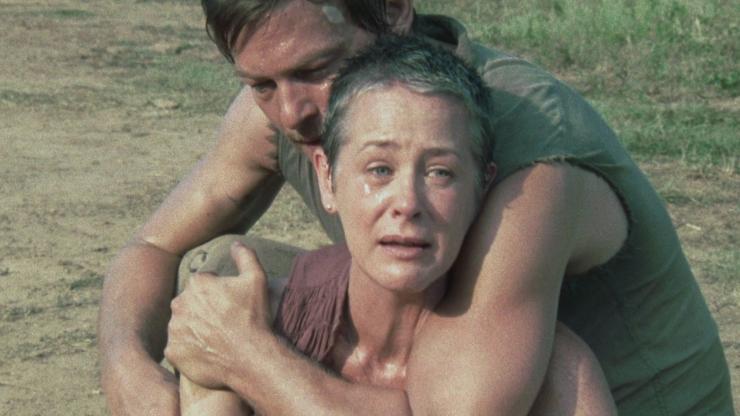 Producer Gale Anne Hurd loves The Walking Dead—and not just her AMC television show, which returned from its seasonal hiatus this Sunday. She’s a big fan of Robert Kirkman’s comic book as well. “The stakes really are life or death. Every moment of every day, you can’t let down your guard. I’ve always been attracted to stories about ordinary people thrust into extraordinary circumstances, and this is the quintessential telling of that story.”

Hurd, who also produced some of sci-fi’s greatest films, The Terminator, Aliens and The Abyss, sat down with us at New York Comic Con to talk about what we can expect to see in season four.

Hurd said, “This is the season where we get to see if people really can return from the dark side. Will Rick be able …to come back from Crazytown? Will he be able to relinquish the reins of the Ricktatorship? Will there be enough peace and harmony in the prison, considering they did bring in all the survivors of Woodbury? Can that kind of peace last, given what human nature is and given, as you’ve seen in the promos, the walkers at the gate?”

Rick wasn’t the only person to have had a psychotic break with reality last season. So did the Governor—and Hurd confirmed, “We’ll definitely be seeing more of [him]” this season.

“The Governor killed his own followers, so he’s gone to a very, very dark place that’s going to be even more difficult to come back from than the place where Rick went in Crazytown. So we’ll have to see what’s become of him. Is he still truly a madman … or does he try to redeem himself as well?” asked Hurd.

As we saw in episode one of season four, Michonne hasn’t forgotten the Governor or her need for “closure” (but instead of using words, she’ll use a katana). But now that Andrea is gone, does that mean that the only ass-kicking female characters will be Michonne and Maggie?

Hurd said, “Laurie Holden is a fantastic actress. It’s very sad not to have her this season. On the other hand, it has provided an opportunity not only for Carol to step up, but also for Sasha and Beth … so actually this season you’re going to see a transformation of many of the female characters.”

Any other transformations? Like, for example, a transformation of the flirtatious yet platonic relationship between Carol and Darryl into a full-on romantic one?

“They have love and respect for each other, no question. They are able to tease each other. You don’t get Darryl to smile very much, but Carol can. I love the interplay between the two of them. I love the double entendre. We’ll see if it develops into anything more.”

We’ll see? Really? So what, exactly, will we see?

“I can’t tell you. That would be such a big spoiler, it would probably be the number-one spoiler of the season.”